I love cooking, and cookbooks and folders filled with recipes clipped from everywhere.

I knew Jose, my husband, was a potential keeper when he had the same 1989 cookbook I’ve used for years, and love, written by American ex-pat Patricia Wells, “Bistro Cooking.” 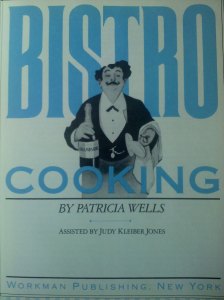 We once had friends over for dinner and the recipe — flambeed chicken with mushrooms — contained the unforgettable phrase “Avert your gaze” for the moment when you ignite the bird. (Or singe your eyelashes and eyebrows.)

Two cookbooks I’m getting to know and enjoy are so utterly different. Even their covers and photos are as unalike — as the British would say — as chalk and cheese.

One, Tamasin’s Weekend Food, is written by Tamasin Day-Lewis, sister of the British actor Daniel Day-Lewis. I have no idea where I bought it — probably on a visit home to Canada, where it’s much easier to find books by British publishers than here in New York. 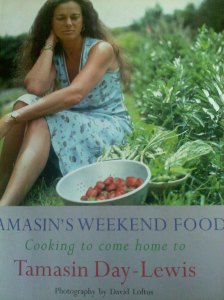 I love everything about this book, from its silver end-papers to the way it’s structured: Friday Night, Saturday morning, Saturday lunch, Tea time, Saturday supper and Sunday lunch.

I love her elegant assumption, (so not true for us), that one has fled the craziness of city life for a weekend spent with kids and dogs in some crumbling 16th century rectory with muddy Wellies in the entryway.

It has a soft red ribbon with which to mark your place.

I love the photos of her — no make-up, lean-limbed, clutching a bunch of carrots in her blue jeans like some Celtic Scarlett O’Hara, long hair askew. Even on the cover, she’s looking down, not smiling and looks tired. 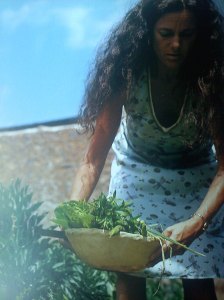 The recipes, each quirky enough to be interesting, are a mix of humble — home-made bread — and vaguely exotic, like pan bagnat., one of my favorite French things to eat.

I recently — on a weeknight even! — when it was rainy and windy and the night air smelled of woodsmoke, tackled her salmon fishcakes with creme fraiche tartare sauce. All of it made from scratch. She insisted on wild salmon — and, indeed it had a wholly different consistency than the filets we usually buy. The tartar sauce, as promised was “moreish, the sort of thing you have to dip your finger into.” Indeed! It was light, creamy, tart and unlike any gummy, nasty bottled tartar sauce I’ve eaten. 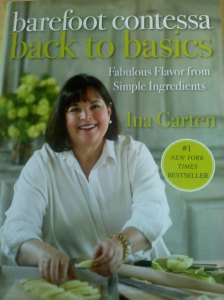 The other book, “The barefoot contessa back to basics” is very American, from its cover image of jolly, not-thin Ina Garten looking into the camera with its perky lime-green lettering, spine and end-papers to the photo of her gorgeous country house — a mansion in the Hamptons and super-elegant kitchen. It was a wedding gift to us from friends who, like us, love to entertain guests. 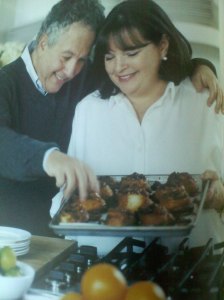 I like that she includes recipes for cocktails, one of which we served at a brunch for friends — mango banana daiquiris.

I like her list of 10 things not to serve at a dinner party, including garlic and raw onions, nuts and two fish courses. (We now make sure to ask every guest if there is any food they loathe, having once made a fantastic salmon dish at which my friend J [sigh] sniffed: “I don’t eat fish.”)

Not the right answer!

The recipes offer a nice range of choices and the color photos are terrific. I’m looking forward to exploring it further even as, (yes, somehow), I try to shed 30+ pounds over the next few months.

Here is a review of 14 cookbooks that came out in 2013, from Time Out New York, and 12 more from The New York Times. (Several books made both lists.) The one I’m most intrigued by is “Ottolenghi”, by the owner of the London restaurant that bears his last name.

Do you have a favorite cookbook or two to recommend?

16 thoughts on “A tale of two cookbooks”