Many people will never visit the bit of Florida where we just spent a brief five-day vacation. Its white sand beaches have the consistency of fresh brown sugar, but it doesn’t have, blessedly, rows of condo towers or huge hotels.

Tucked between Panama City to the west and Tallahassee to the east, closer to Alabama than the rest of the state, it’s called the Forgotten Coast.

Jose and I had each been to Florida several times, for work and pleasure. I’d visited Key West, Miami, Orlando, Tampa and St. Petersburg. But we’d never been here.

My father and his partner rented a house — like most on St. George Island, set high atop stilts — and invited us; we flew on points, rented a car and drove the 90 minutes west from Tallahassee, sharing our small aircraft with South Florida University’s women’s tennis team.

The very day we arrived, carrying our usual pile of weekend newspapers, The Wall Street Journal ran a cover story on Old Florida, naming only a few historic towns, one of them the one we were heading to, Apalachicola.

The town is tiny, barely 2,000 people, but cars lining the main street bore license plates from Maine, New York, Pennsylvania, others, like us, desperate to flee winter for a while.

There are many small, one-storey houses and several enormous, beautifully-renovated ones, Victorian-style, with large windows and gingerbread trim, painted soft yellow or pale green, and clearly the second (or first) home of wealthy outsiders.

There’s a small, narrow bookshop, in a building from 1900 and a place selling home-made Turkish delight. You can buy a natural sponge or a jar of Tupelo honey, all very exotic to a Yankee.

It’s home to fisherman, whose daily catch of fish, scallops, oysters and shrimp made for a delicious, healthy change from the frozen lumps imported from Thailand that pass as “shrimp” where we live.

To reach the town, we passed Carabelle, Sopchoppy and Panacea, then saw Lake Morality Rd. — leading to a state prison. We also saw multiple road signs warning us of bears, then bears with cubs.

We also saw a neon-pink sign: State Prisoners Ahead.

Here are some of my images:

I loved driving across the causeway and having a pelican whiz past me, at eye-level, heading the opposite direction. The island is surrounded by marshland, filled with wildlife and birds: osprey, heron, pelican, bald eagles.

As we drove back to the airport, every pelican sat atop its own wooden pole at the water’s edge, and sunlight backlit the Spanish moss, draping from every tree.

Closer to Alabama than the rest of Florida, this region is definitely the South — with White Lily flour and pralines at the local grocery chain, named Piggly Wiggly, grits and biscuits for breakfast and hush puppies at dinner.

I stopped to photograph one of the town’s major industries — oysters — warned to stay far away from the loading dock by one of the workers. I felt like Tippi Hedren in Hitchcock’s film The Birds, as seagulls swooped past my head, diving into the growing mountain of discarded oyster shells dropping from the factory’s conveyor belt. 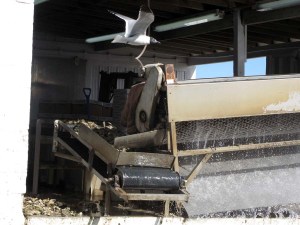 We had poor weather — so cold one night we layered on multiple blankets — but it was still a brief relief to shed our hats, mitts, boots and coats for even five days, heading back to more bloody frigid winter for at least another month.

It’s too easy to forget how many other worlds are out there for the discovering. At the table behind us one night, a huge, burly fisherman, hands the size of plates, gently cradled his tiny baby, gurgling in her pink onesie. You don’t see that where I live, in manicured, overpriced, suburban New York.

How was your last vacation?

Or do you have one coming up?

17 thoughts on “Prisoners and pelicans and bears — oh, my!”