It’s a thing that started in Europe.

Dancing without drugs or alcohol?

It’s a radical notion — a club scene without the usual bullshit dramas of standing in line, wearing the wrong clothes or paying way too much money for drinks you don’t want.

What I found was an amiable crowd of corporate employees and artists, mostly in their 20s; they seemed appreciative of the multiple chaste offerings, including massages, pre-dancing yoga and a “Free Haikus” corner, where a pair of poets who call themselves the Haiku Guys hammered out verses on attendees’ topics of choice. At 7, the atmosphere felt a bit awkward, and the dancing was tentative, but the room soon became rowdy and enjoyable.

“You get some exercise in, you feel great physically, and it’s an incredible dance party,” said Matthew Brimer, 27, a co-founder of Daybreaker. “Dance culture and underground music tends to be boxed in to this idea that you need alcohol or drugs to enjoy. What we’re trying to say is that there’s a whole world of creative experience and dance, music and art.”

Two friends in New York — Radha Agrawal, 36, the founder of Super Sprowtz, a children’s nutrition company, and Matthew Brimer, 28, a founder of the adult-education school General Assembly — came up with the concept two years ago over late-night falafel in Williamsburg, Brooklyn.

“We were talking about how the morning space in general is pretty boring, people have their routines and that’s about it, and the night-life scene in New York is so dark and synthetic and not community driven,” Mr. Brimer said over the phone. “You know when you leave a nightclub and feel depleted? We wanted to turn that concept on its head.”

Daybreaker holds regular events in not only San Francisco (in places like the Yerba Buena Center and Supperclub), but also in New York, Los Angeles, Atlanta, London and São Paulo, Brazil. The cost: generally $20 to $40 a person, depending on whether you opt into predance party yoga or not.

This week, on a cold, gray Manhattan Wednesday morning, Jose and I — who are long past our 20s — got up at 6:30 after staying at a friend’s apartment. A bagel and some coffee and a cab ride over to the Highline Ballroom, on the far west side of the city.

We’d paid $25 per person ahead of time; you have to be on a list to know when and where the next one is being held.

I got my hand stamped with Daybreaker’s symbol — a stylized rising sun.

The cavernous space was filled with a yoga class finishing up. The floor cleared and it was our time.

Nothing makes me happier than dancing and I’ve missed it terribly.

So for the next two hours, surrounded by 700+ other happy people, I danced; I think I sat down for about 10 minutes.

The mood felt oddly innocent, joyous, free — for once — of the chronic and terminal status anxiety that infects most of us who live and work here.

It felt like one big playground, the kind without bullies or cold wet cement onto which you’d probably fall.

A man playing electric violin came through the crowd.

A man played a didgeridoo from one corner of the stage. 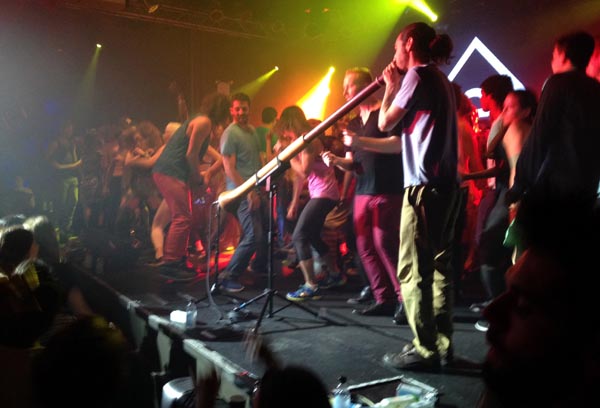 The bravest came and danced in the middle of the stage while the female DJ, in from L.A., spun her tunes.

A pair of very large vegetables appeared — apparently a broccoli and a celery, although one looked more like okra to me — guys or women inside huge costumes.

It was sweaty and frenetic like any club scene, but, blessedly, never weird or scary.

People caught Jose’s eye, noticed his age and gray hair, and smiled. I saw perhaps a dozen people our age.

Some people wore work clothes and many began streaming out around 8:30 as they headed off to their office jobs; it ends at 9:00 a.m.

To close, a young man performed a terrific rap poem about the New York subway — and how we so studiously ignore one another, eyes safely down or staring down the tunnel waiting for the train, instead of potentially connecting.

Then it ended as we all sat on the floor and, handed this card, all read aloud a segment of this lovely poem by Alfred Lord Tennyson — written in 1833 and published in 1842.

We read it quietly, in unison, a sort of secular prayer, the 21st century sweetly colliding with the 19th, read by 20-year-olds in gold spandex shorts and rainbow platform shoes. 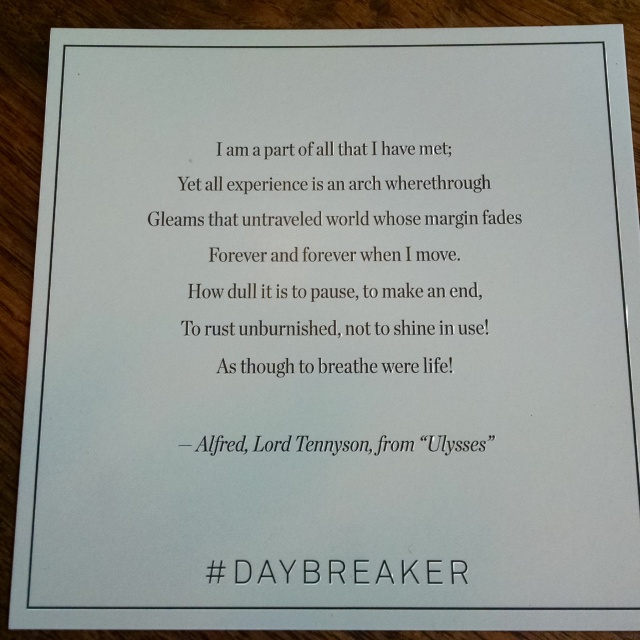 Then, exhausted, drenched, ablaze with endorphins, we scattered back into the city and out into our day.