I’ve been working as a journalist since my sophomore year of university; clips and details, here, at my website.

Decades later, despite the brutal disruption of our industry, I still write for a living.

Here’s a brand-new 36-minute podcast in which I describe how I conceive of, report and think through my stories and non-fiction books.

Sadly, many of us — certainly those with 20+ years’ experience — are starting to feel like whaling ship captains in the new era of steam, offering terrific skills that fewer and fewer publishers want or can afford to pay for.

The British daily The Independent recently killed its print editions and thousands of journalists are losing their staff jobs all over the world.

I still ply my trade freelance, publishing online and in print, for outlets from the Case Foundation to The New York Times.

The terrific new film “Spotlight” won this year’s Oscar for Best Picture, about the investigative team at the Boston Globe and how it uncovered sexual abuse within the Catholic church. Here’s my earlier post about it.

Here’s a radio interview on CBC, (18:20 minutes in length), with the female member of the real Spotlight team, Sacha Pfeiffer, about what it’s like to work in investigative journalism — and to be observed and portrayed by an actress on film.

And here’s an interview with Joshua Hammer, whose story about Ebola for the digital site Matter, a piece of 9,000 words, won him a 2016 National Magazine Award.

If you, or anyone you know is considering working as a journalist — or you’re just curious about the process — this film is truly a must-see.

It’s the only movie I know of that shows the daily minutiae of reporting and how long, slow and sometimes tedious it can be to get to the point of proof and publication.

One of the things I still admire about journalism, at its well-funded serious best, is its larger goal of public service; here are the recent winners of the George Polk Award, given each year to American journalists in all media for their investigative reporting.

And those of us who do it professionally, especially within news, know there are many other people whose skills help us get it done safely and accurately, from translators to fixers to unnamed but well-placed sources.

Here’s a New York Times front page story about the death of one of them, a Syrian soldier who helped the Times tell the story of the mayhem happening in his country.

By the time you see or hear a story online, on radio or television or in print, hundreds of decisions have been made about it and decisions made by dozens of professionals. Journalism remains very much a team sport.

Here’s some of what happens before you ever see or hear a work of journalism:

Someone gets an idea

It happens in a variety of ways.

It might be from a press release, sent out by a professional agency whose job it is to promote their clients and their interests.

It might be something we noticed — an ad, an overheard conversation on the bus or at the dog run or while in a doctor’s waiting room. I saw something this week in a local drugstore, a new and unusual product that’s a direct reflection of recent cultural change. It might be a story.

It could be something we read or saw, yes, already produced by another journalist  — but not in depth or not for an audience we know well.

It might be a wire service story our editors want deepened or localized; if too local or regional, maybe looking at it nationally or globally.

Many reporters work a specific beat, (like a cop’s beat, an area they are meant to know intimately), and stay in close touch with sources in it, whether aerospace or retail or philanthropy.

Much traditional reporting, (a weakness in its conceptual narrowness), focuses on institutions of power and its players: the schools, courts, police, Wall Street, Big Business, Parliament or Congress or its various committees. The ideal is to hold the powerful accountable for their decisions, many made in secret and many using taxpayers’ money or affecting public policies.

The reality is now that digital sites are ravenous for copy — and most pay crap — $50, $100, $200 for stories that can still require significant skill, experience and lots of time to report and write.

Young writers are lining up for it, and beating their ambitious wings against the locked doors of print publications.

I live in an expensive part of the world — the New York City suburbs — and most of my work is either produced for print or paid at print rates.

What’s the story — and who cares?

We’re paid to question authority, (even if we often fail to do so in an era of concentrated media ownership and few jobs.)

As the saying goes, “If your mother says she loves you, check it out.”

So what is the story and why should anyone else make time to read or listen to it?

Who are the main characters? What’s new or different?

Does it reflect a trend?

What expertise or insight can you bring to it?

Is it even really worth doing?

Here’s a great blog post by a science journalist who decided — as we all do sometimes — to drop a story after she realized it was bogus. 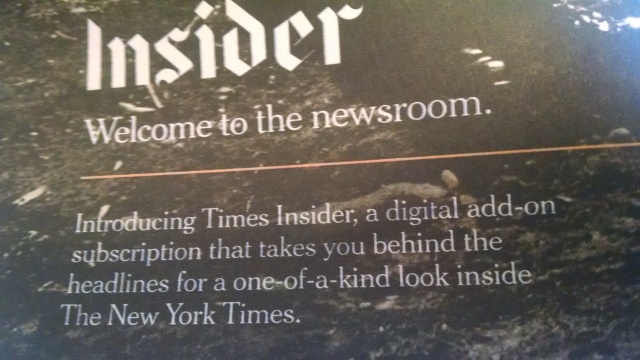 We try to sell the idea to an editor, either someone who’s our boss (and their boss) or a freelance client

Much of what we do requires the delicate art of persuasion. We have to feel passionate enough about each story — ideally — to do the work of reporting, interviewing, researching, writing and revising it.

But we also have to have skills and expertise not to make a mess of it. Do we have the right contacts? Do we speak the lingo of that industry?

If freelance, is it even worth doing financially? It can take days, weeks or months to properly research a story and we have to budget our time carefully.

What if it requires travel expenses — plane/train/car rental/hotel/meals? When budgets are tight, every additional penny must be justified.

Which is why so much lazy, crappy reporting is now done by phone, email and Skype. It’s cheaper.

What’s the best way to tell this story?

One of the joys and challenges of producing quality journalism now is the decision process when presenting it — a video? a podcast? a broadcast? A 3,500 word feature? A Q and A?

This BBC video — of a former concentration camp in Germany — is astounding. The images were shot using a drone.

There are so many ways to present information.

The goal should always be to engage the reader, to bring him or her with you into the places you’ve been to gather the material — the sights, sounds, smells, tastes and textures.

How soon do we need to jump on it?

In an era of Twitter, Vine and Periscope, the rush to be first is exhausting and getting worse.

What if one of our many competitors gets it before we do?

Who do we need to include to tell this story?

This is where so much journalism remains weak  — still depressingly filled with white, male voices and few  women and/or people of color, as this story points out.

I usually write nationally-reported stories and try to find a mix of people in age, race, geographic location and profession as sources.

Once we’ve figured out our possible list of sources, we need to consider possible conflicts of interest; (does their brother own the company? Did they attend that school?), and decide who’s most likely to give us time and how much of it.

There’s a distinct pecking order to whose calls and emails will get returned the fastest; if you’re writing for a trade magazine instead of a Big Media Outlet, be prepared to make a lot of return calls. For freelancers, time is money and every wasted minute costs us income.

How much reliable accurate information can each source give us?

This is the hidden 90 percent of the iceberg of every story you’ll ever read or hear, and one that “Spotlight”, unusually for a film about our biz, explains well.

It means actual legwork — sometimes physically venturing into neighborhoods or places we already know are unwelcoming, and maybe unsafe.

Knocking on doors. Calling people who never call back. Sending dozens of emails.

If you’re working in a foreign country, you may need a bodyguard, a fixer, a translator and a driver. You also have to find them, trust them with your life and pay them.

What do you need to take with you? War reporter Janine di Giovanni recently told the Financial Times her kit always included a morphine syringe, a tourniquet — and a little black dress because, you never know!

I know two seasoned female reporters who recently went into dangerous territory (Mexico, researching narco-terrorism) and South Sudan (researching famine) for their work. That’s normal. That’s what some of us do.

How much time before you’re done?

I recently proposed a story that I knew would be complicated to do well. Hah! It took me eleven interviews, each 30 to 75 minutes long, to understand it well enough to write it for a general newspaper audience. Then I still needed time to write it.

The worst thing to do is rush and skimp. I call the result Swiss cheese journalism, full of holes.

Does it make sense?

This is where the best and toughest editors are our saving grace. It’s their job, even when we resent it, to question our thinking, decisions and sources, the structure and tone and length of what we’ve given them.

It’s very easy, after spending a lot of time working on a story, to completely forget that — for the viewer or listener — it’s all new to them!

19 thoughts on “Getting the story is a story in itself”