I’ve seen four plays within a month: “Blackbird” on Broadway with Jeff Daniels and Michelle Williams, Wild Sky at the Irish Arts Center, Hughie on Broadway with Forrest Whittaker and The School for Scandal at the Lucille Lortel, a 200-seat theater on Christopher Street in the West Village.

Thanks to tdf.org, all four shows (single seats, all excellent seating) cost $147, about the cost of one Broadway ticket.

I’m a movie buff and my first entertainment choice, at home or out, is always to choose a film, whether a documentary, foreign film, drama or comedy. (I don’t watch horror films.)

So this theatrical binge was both unusual and instructive.

I loved Blackbird; here’s my blog post about it.

I didn’t much enjoy Hughie and found it (written in 1942) very dated. But the set and lighting were gorgeous and the acting excellent.

Wild Sky reminded me what a magic act theater really is: three actors, no scenery, a tiny stage and audience. It was about the 1916 uprising that led to Irish independence.

And The School for Scandal — written in 1777 (!) — was funny, fresh and delightful. The costumes were a hoot, (the men wore tremendous wigs, some lime green or purple), the sets inventive and the acting terrific. When you come home imitating specific lines and quoting them verbatim, that’s a great play and performance.

Theater is, by definition, a high wire act, both for the actors and the audience.

The pair point out that every night, and every audience, is different, as are their reactions — a laugh line met with hilarity one night can be met with frosty or confused silence the next.

That silence can rattle the best actor, unless they realize what a living, breathing thing every performance is.

They’re both eloquent here on this fundamental point.

An audience member might fall ill or have their cellphone ring. A piece of scenery might break or fall, (one show here was notorious for its many injuries, including broken bones and a concussion). Someone might forget their lines.

We all hold our collective breath and, as the house lights dim, embark on that show’s adventure together.

In a mediated screened world, it’s an intimacy hard to duplicate. 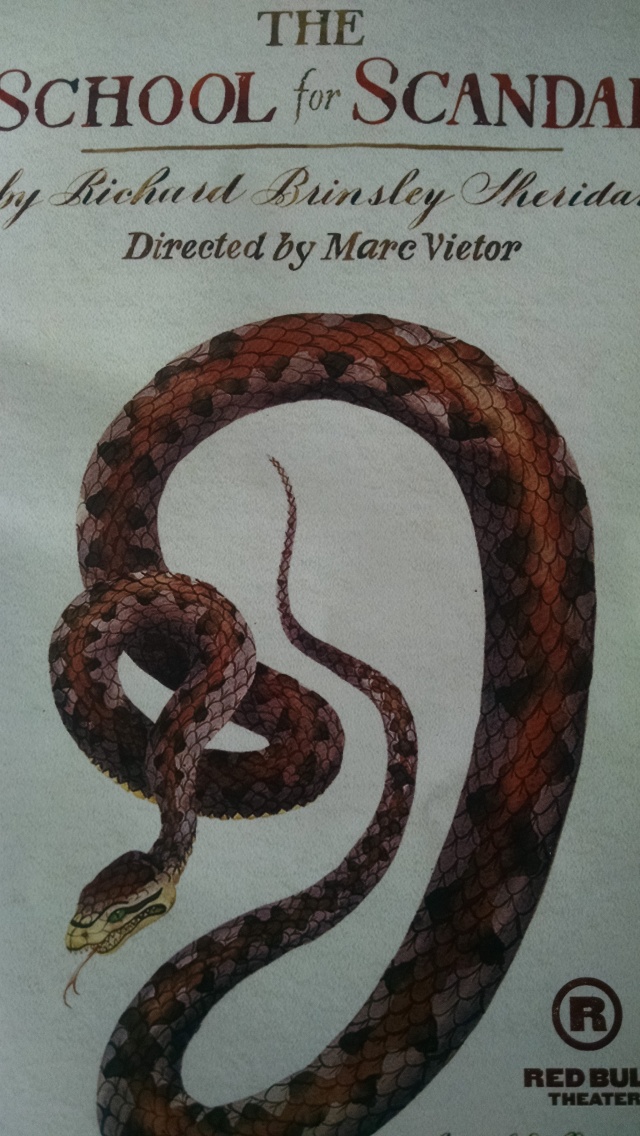 Great writing speaks to us across centuries

Most of us know the works of Shakespeare and some of the classics. It’s rare that we get to see a production from the 18th century — The School for Scandal met its first audience the year after the United States declared independence from Britain, in 1777.

Imagine the world then!

No cars or computers or endless Presidential election campaigns.

And yet…and yet…the most human urges: to scheme, to gossip, to backbite, to create false rumors, to swindle, to grab an inheritance, to marry someone twice (or half) your age, all of which are addressed in this excellent play with wit and charm.

There’s slapstick, romance, surprise, betrayal. They all cross the centuries quite nicely.

Success is fleeting, elusive and rarely a permanent condition for playwrights, (or many other creative people.)

On my way home, an hour’s drive, I listened to the great CBC radio show q which is also played now by some NPR stations in the U.S.

I loved his calm demeanor when asked about his fame and fortune after winning the 2013 Pulitzer Prize.

“I’ve been doing this for 20 years,” he replied. “I never internalized my rejections — why would I internalize my success?”

And, even as we all still watch and savor SFS’s playwright Sheridan’s work — 229 years later — he, of course, died in poverty.

So many of the artists whose work we revere today, which draw audiences and whose paintings now sell to Chinese and Russian billionaires for millions, struggled lifelong to earn an income and support a family and find appreciation for their ideas.

A good and powerful reminder, I think.

9 thoughts on “Three thoughts about the theater”