A Muslim woman named Ibithaj Muhammad, 30, is in Rio now, competing as a saber fencer for the United States. She will the first female fencer to compete while wearing a hijab.

Here’s an NPR interview with her.

For those less familiar with fencing, there are three weapons: foil, epee and saber, each with a different style, in which different body parts are target and, as a result, tend to attract different personalities. Saber is for the hard-core!

In saber, the entire body above the hips, including the head, is fair game, based on the amount of body surface most available when fighting on horseback. Aggression is rewarded.

However unlikely — but true! — her presence in Rio this month is in part due to the first American women to fence saber in national competition, back in the 1990s, back when (yes, really) the governing body for fencing (old European men of course) said, “Noooooo, women can’t fence saber in the Olympics. Too dangerous!”

I was one of them. 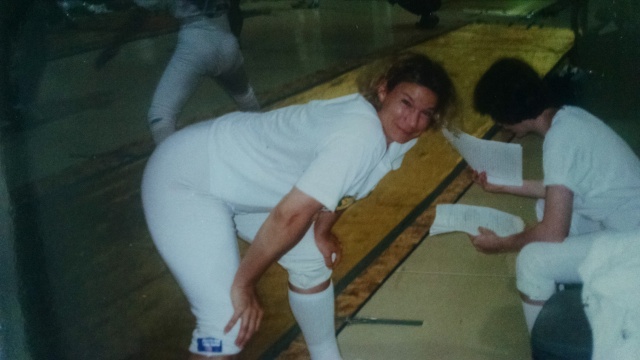 Thanks to us breaking ground by fencing at nationals, U.S. women saber fencers have since gone on to win multiple Olympic medals. So damn cool!

When I arrived in New York, with no job, no family, no friends, I needed a place to go to connect with my new home. I’d long wanted to try fencing, as it combined many of my favorite things: French (many terms are French), a long and distinguished history, lots of terrific NYC competition, intellectual and physical challenge.

They say fencing is chess at the speed of boxing. It’s a fantastic sport, and I was lucky enough to find classes at New York University and a two-time Olympian coach, Steve Mormando.

He introduced a small group of women to saber and we soon began training twice a week (two hours each time), taking individual lessons and competing regularly at the local and regional level. 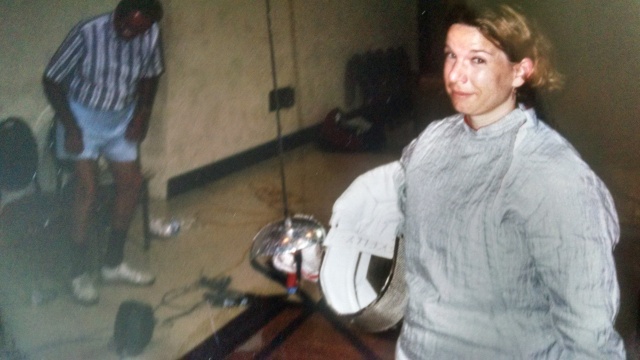 I went to nationals four times, each time getting eliminated just before making the final eight.

I’m thinking of taking it up again. I miss it.

I hope some of you will make time to check out the fencing and keep an eye on Ibithaj — Monday August 8 at 8:00 a.m EDT.

Here’s a profile of her from the Associated Press.