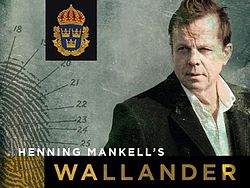 I’m not, per se, a huge fan of cop shows, (although I enjoyed, and miss, NYPD Blue.)

But three shows have really caught my attention: Wallander (the Swedish version), The Tunnel and Inspector Lewis.

There are two versions of Wallander, the Swedish one (with English subtitles), filmed in the small southern coastal town of Ystad, and the English one, with Kenneth Branagh. For a variety of reasons, I prefer the Swedish.

I love the craggy, grumpy Wallander (pronounced Vall – AN -der), played by Krister Henriksson, who always looks like he could use 10 more hours of sleep, some coffee and a shave. He supervises two young detectives, Pontus and Isabelle, and their relationships form an interesting backdrop to the storylines.

I love the moody gray, blue and black palette of each 90-minute episode, which feels — to a North American viewer accustomed to 30 or 60-minute shows punctured with ads — luxurious and immersive, like a movie.

I love seeing Sweden’s gorgeous landscapes and beaches, and I like the way they say “Tack!” like a gunshot (Thanks, or please) into their cellphones.

I sat riveted every Sunday evening to see The Tunnel, a BBC production that is — a first — bilingual, half in French, half in English. It’s also the first time that officials allowed anyone to film inside the undersea tunnel that runs between England and France.

I missed the first episode, but it begins with the discovery of a woman’s severed body, half on the English side of the tunnel and half on the French side.

“Ah, les rosbifs“, sigh the young French female detectives as the grizzled English cops arrive, as they now, resentfully, have to work together to solve a bi-national crime.

I saw no North American press coverage of this amazing show, and think Clemence Poesy is astounding as Elise Wasserman, the pale, taciturn blond who leads the French investigation. Her leonine face seemed to be make-up free, her hair always un-brushed, focused laser-narrow on her work.

Her British counterpart, Karl Roebuck, is a tough old thing who has multiple children with multiple women — and can’t keep his trousers zipped. He’s used to charming his way through most situations, a tactic Elise (even tougher) is utterly immune to.

The storyline is complex , with a surprise twist at the end.

It’s violent, of course, at times but emotionally compelling, and I found myself deeply involved with the two key characters.  This 10-episode series also had a very distinctive aesthetic — pale, washed-out, everyone wearing blue, black, green or brown.

The scene switches constantly from England to France, from one culture and language and procedural style to another. (As someone who’s lived in both countries, and speaks French, I loved this element of it.)

Inspector Lewis, (simply called Lewis in the UK) is so English!

Set in and around the gorgeous city of Oxford, and on the university campus, its three major characters are as likely to head to the pub for a pint as to gather at a murder scene.

I haven’t yet been to Oxford, (or Ystad), so I enjoy seeing the gorgeous scenery and the creamy stone buildings of the university. There are endless little digs at class difference and a wry perspective on the insularity of academic life.

Like Wallander, Morse plays a somewhat avuncular role with his younger sidekick, and it’s interesting to watch that relationship.

These shows allowed me to enjoy visiting Europe each week, without a long flight or jet lag.

Do you have a favorite police show?