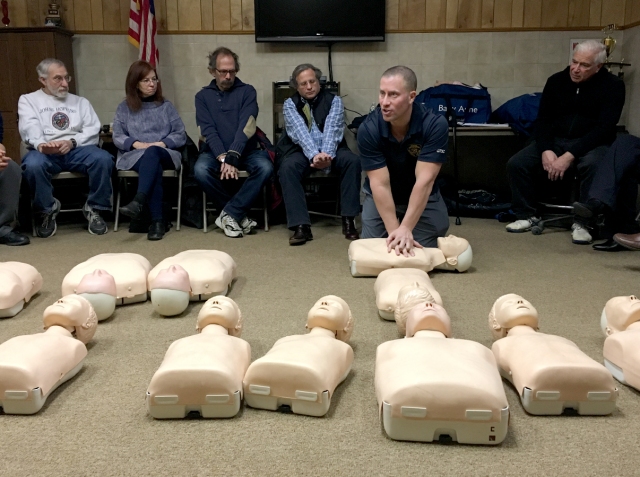 Jeff is the man wearing the blue checked shirt and vest.

It happened on a suburban September Saturday afternoon.

Our co-ed softball team, who’ve been playing together for 16 years, was in the middle of a game when Jeff, a 61-year-old teacher, ran to first base — and collapsed.

“Don’t be so dramatic!” scoffed Paul, the first-base coach.

He was having a heart attack, in the middle of a ball field.

Luckily, one of our team-mates, a physician, was there and immediately knew — and knew how — to start chest compressions.

Police came, and EMTs and a paramedic and took Jeff to a local hospital, where he was placed in a medically induced coma.

He’s back to teaching.

He’s back to playing softball.

I wasn’t there that day, but it terrified everyone who witnessed it, helplessly, fearful that our friend would die in front of them.

So, wanting to be sure we’re prepared should it ever happen again, 28 of us paid $35 apiece to take a two-hour Saturday morning class last weekend to learn how we, too, might be able to save a life if needed. 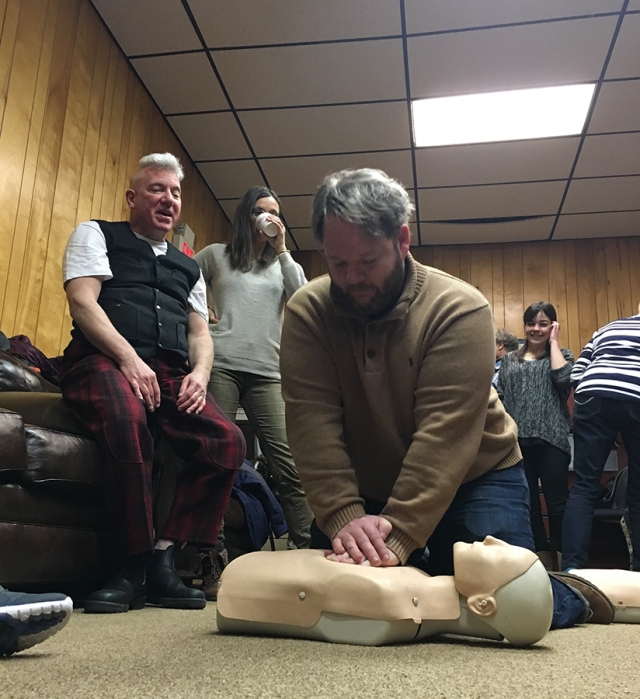 It was deeply sobering — you have barely four to six minutes to get someone’s heart pumping again before their brain is damaged.

There’s no time to waste!

You can’t want someone else to fix it.

You have to do it, and do it quickly and do it with strength and speed — 120 compressions per minute. You’re mimicking a heartbeat for someone who doesn’t have one.

We each practiced on plastic dummies, both child and adult-sized.

We also learned how to do the Heimlich maneuver, on adults, children, infants and (worst case) even ourselves if we’re ever alone and choking. (Lean hard against a chair back and push down on your diaphragm.)

We also learned how to use and apply the two pads of a defibrillator and how to do so safely.

It was a lot to absorb, physically, intellectually and emotionally.

“No matter what happens, you tried your best,” the instructor cautioned.

Not everyone will survive even the best rescue attempt — unlike a recent local save who needed 25 minutes of CPR to return, literally, from the dead.

After the class, there was a lovely, moving ceremony in the town’s volunteer ambulance garage, with the town mayor and the nine people: EMTs, two police officers and a paramedic whose quick action and excellent skills saved our friend’s life.

Jeff gave a quick, graceful speech and served us a lemon cake at lunch to celebrate his second life.

If you’ve never learned CPR, I’d urge you to consider doing so.

It’s not as complicated as you’d think and there’s nothing worse than feeling helpless in a life-threatening situation.