This is a regular column that runs in the Arts section of The New York Times. As author of two works of nationally reported non-fiction — the second of which was nominated for the prestigious Hillman Award and published in China — I thought I’d do this here as well. 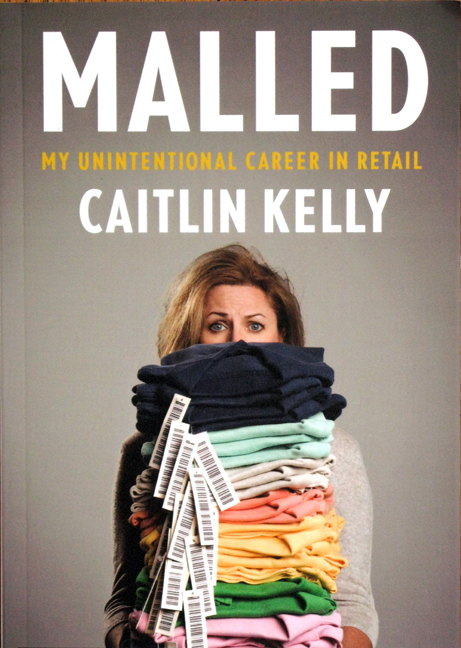 When did you first get the idea to write this book?

I worked at a trade publication in New York City as an editor and was friendly with a colleague there. One evening, having dinner at her apartment — where she had a doorman and a very large dog — I asked her (?!) if she owned a gun. She did, a handgun. I was a bit stunned and wrote an essay about this for The Globe and Mail, my former newspaper in Canada. I went on to attend a three day shooting class and wrote about that for the Wall Street Journal. After writing a much longer feature on it, I realized there had not been a book written about American women and gun use, whether they enjoyed it or feared it used against them or their loved ones. It was clear there was a lot of great material to be gathered and many stories to be told. For Blown Away, I spoke to 104 men, women and teens from 29 states. Here’s a link to the book.

For Malled, I was urged from the very start to write about it, but couldn’t see any narrative arc or story line to the menial job of folding, hanging and selling clothing for The North Face. But I worked part-time, at $11/ hour, for 2.5 years — much longer than the average retail sales associate, so I watched the economy plunge into recession (2007 to 2009) from a specific and unusual place. The book is also a story of how the retail industry works, from the inside, so it’s both a memoir and a business book. I was urged to produce the book after a column I wrote in The New York Times prompted a flood of appreciative comments and emails. Here’s a link to the book.

What’s the most surprising thing you learned while writing it?

For Blown Away, the regional differences in how Americans view gun use and gun ownership is huge. People really don’t understand it and underestimate its political strength. It isn’t just the NRA’s powerful influence and deep pockets, but also strong cultural and historical attachment to gun use and gun ownership that’s deeply embedded, for millions of people, in the very idea of what it means to be American. But because those in your local area are likely to share your views on gun use — whether pro or con — you usually end up with confirmation bias, unable to envision or understand this.

For Malled, It was really depressing to hear the words “disposable” used over and over again to describe the hard-working, poorly-paid staff that stand for eight hours in all retail stores. The highly paid executives at corporate headquarters of every major retailer spend millions of dollars buying specialized software — designed to reduce the costs of labor. It was so demoralizing to do a job to the best of our ability and realize that no one (in corporate) cared or would ever compensate us accordingly. My “raise” in 2.5 years? Thirty cents an hour.

They’re both what I wanted them to be — a firsthand and intimate examination of two of the United States’ most intractable political issues: gun ownership and low-wage labor.

Who is a creative person (not a writer) who has influenced you and your work?

My parents and late stepmother. My father is a former documentary film-maker and my mother a journalist and my stepmother wrote television series. All worked freelance in challenging and competitive creative industries. I learned early that your own great ideas, presented and sold well, can earn you a living. That was pretty revolutionary, and certainly inspired my own work as a writer.

Persuade someone to read “Blown Away” or “Malled” in 50 words or less.

Blown Away is the only book of its kind, a nuanced, balanced deep dive into how guns affect women in the United States, whether they use one for sport, work or self-defense, or have been traumatized by the use of one against them or a loved one.

Malled is similarly unique, offering a firsthand examination of low-wage labor in the U.S., and explains in detail what it is like to work for paltry wages in a large and crucial industry and in an economy based on consumer spending.

10 thoughts on “Five questions about my 2 books”