I won’t repeat the endless warnings I read daily.

If you follow the news, you’re also well aware.

We were back up in Montreal last weekend where I was heartened to see this large street protest — calmly protected by multiple police officers — as students took to to the streets for their Friday school strike. 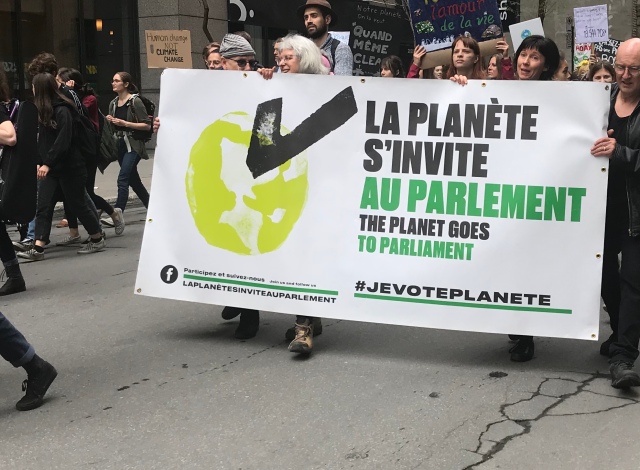 They were inspired by a high school student far away across the ocean, Swedish schoolgirl Greta Thunberg, recently profiled by Time magazine as their cover story, extraordinary in itself.

Castigating the powerful has become routine for the 16-year-old. In December, she addressed the U.N. Climate Change Conference in Poland; in January she berated billionaires at the World Economic Forum in Davos, Switzerland. Her London speech was the last stop of a tour that included meeting the Pope. (“Continue to work, continue,” he told her, ending with, “Go along, go ahead.” It was an exhortation, not a dismissal.)

Just nine months ago, Thunberg had no such audiences. She was a lone figure sitting outside the Swedish Parliament in Stockholm, carrying a sign emblazoned with Skolstrejk for Klimatet (School Strike for Climate). She was there for a reason that felt primal and personal. While Thunberg was studying climate change in school at the age of 11, she reacted in a surprisingly intense way: she suffered an episode of severe depression. After a time it lifted, only to resurface last spring.

“I felt everything was meaningless and there was no point going to school if there was no future,” Thunberg says. But this time, rather than suffer the pain, she decided to push back at its cause, channeling her sadness into action. “I promised myself I was going to do everything I could do to make a difference,” she says.

I confess to feeling daily despair over a changing climate wreaking havoc worldwide: floods, tornadoes, hurricanes, cyclones, droughts, incredible heatwaves, all of which are damaging agriculture and the oceans, drying up crucial sources of water and causing millions of people living in vulnerable areas to wonder where else they might possibly live safely.

Indians recently fled a cyclone thanks to receiving in advance millions of warning text messages —- while Ottawa, Canada’s capital, recently coped with the worst flooding in 25 years.

No one is safe.

What, if anything, are you doing to deal with climate change?

Is it affecting your life?

Will it affect how you vote?

12 thoughts on “Climate change: what next?”