Charlotte Bronte’s dress and shoes, from an exhibit at the Morgan Library in New York City

Here’s a quick overview of some great museums now showing their works online.

Let’s face it — one of the great joys of living in or near New York or London or Paris or Berlin or Copenhagen or so many cities worldwide — is ready access to its great museums and galleries.

It’s such a luxury to drop into the Met or MOMA or the Tate or the Carnavalet and cruise through, knowing you’ve got all the time in the world, as a resident and not a rushed tourist, to return when you please.

I was so lucky, the last day of my time in D.C., March 8, to see a show of Edgar Degas at the National Gallery. In retrospect, I should not have been in any crowded space! But we didn’t really know that yet. 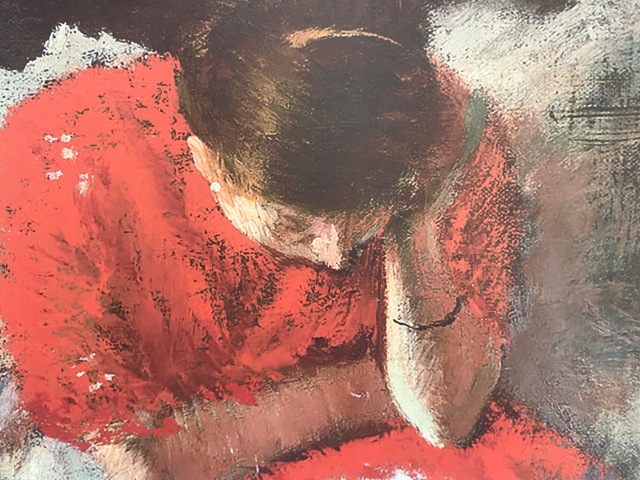 A detail, taken from the poster outside

It was a fascinating show and I learned a lot about him and how he captured his images of ballerinas, often in the studio. Where he never went! Photography was in use by then and he often, apparently, relied on those images.

And, if you know anything about ballet, there were a few of his paintings that were bizarrely fanciful — like one of a ballerina sitting on (!?) a bass and another sitting on top of the accompanist’s piano.

Nope! No dancer would ever dare.

And now, with tremendous loss of revenue, one of my favorites is truly under siege, unlike the Met which has billionaires on its board. This is the Tenement Museum on the lower East Side.

Experts said its loss would be significant because, while many museums chronicle the history of the rich — their mansions, art collections and aesthetic tastes — few depict the history of the poor, and the cultural life of everyday Americans.

“The Tenement Museum has so magnificently reconstructed that,” said Tyler Anbinder, a history professor at George Washington University who specializes in immigration, “right down to the soap boxes and the scouring pads that immigrants used. If an institution like that were to go under, it would be a real tragedy.”

Other museums around the country are losing at least $33 million a day because of coronavirus closures, according to the American Alliance of Museums.

Founded in 1988 in two once-dilapidated buildings, the museum offers tours of the restored tenement rooms as well as a permanent collection of artifacts, including document fragments, photographs and furniture.

I’ve been twice to the Tenement Museum and it was unforgettable.

I went there in my early 20s, on my only visit to Hawaii. I have very few objects from that period…but here it is!

Some of my other favorites include:

The Carnavalet, Paris…the history of Paris

The Victoria and Albert, London

The Bardo, Tunis….which has an astonishing collection of mosaics

The Vasa Museum, Stockholm…devoted to one ship that sunk in Stockholm harbor the morning it first sailed in 1628

What are some of your favorite museums — and why?