I hadn’t heard that phrase until September 2019, when I sat down to interview an American physician, Dr. Emily Queenan , describing why she stopped working in her native country and moved to work in Ontario. It wouldn’t have been the easiest choice, choosing small-town Ontario with mixed-race children and having her husband leave a corporate job.

But it was absolutely the right choice for her.

From my 2020 story for The American Prospect:

Dr. Emily Queenan, who is American, also voted with her feet; after studying biology at Williams College, working for Americorps in Peekskill, New York, in community health, and attending medical school at the University of Pennsylvania, she did her residency in Rochester, New York. She opened a family medicine practice there in June 2009, closing it in May 2014—and moving to Canada. 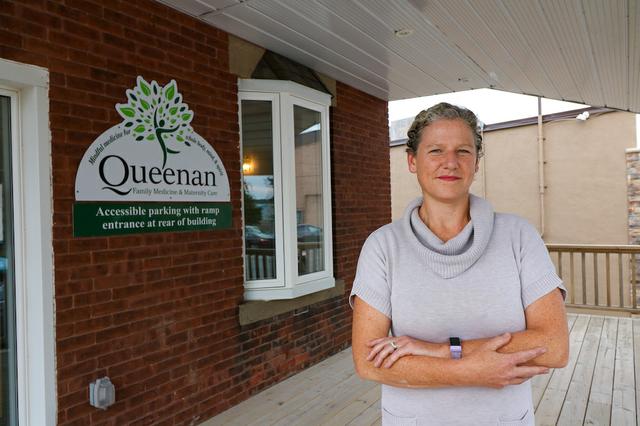 Dr. Emily Queenan, who is American, standing on the front porch of a 1920s-era red-brick house in small-town Ontario whose main floor is now her office.

After being recruited by an agency of the MOH, Queenan visited four cities selected from a list of rural communities needing a doctor, She chose Penetanguishene, a middle-class town of 8,962 in northern Ontario on Georgian Bay, a beautiful area that welcomes many summer-home visitors.

“It was a wrought decision to close my practice,” Queenan says, sitting in the 1920s-era red-brick house in small-town Ontario whose main floor is now her office. “I envisioned having my [U.S.] practice for decades. But I was really burned out by the burden of being someone’s family doctor and the moral injury of denying care versus the lack of payment versus dealing with your own medical bills. This is not asked of other professions.”

Still in New York, Queenan attended a local meeting of Physicians for a National Health Plan, an American advocacy group founded in 1985 by Dr. Steffie Woolhandler and Dr. David Himmelstein, “trying to decide what was next. I was on the cusp of turning 40 and saw a career of fighting stupid fights. Doctors across the country were going through exactly what I was going through. I am not unique.”

Maybe you are, or know, a physician or nurse or other healthcare worker; my first husband is a physician I met when he was finishing med school at McGill so I watched him through his residency and early practice — which brought him to some unpleasant realities.

Most healthcare workers choose their profession because it expresses their values — to help and to heal, whenever and wherever possible.

Covid has torn their world to shreds, as evidenced by the recent suicide of Dr. Lorna Breen, an ER physician who had worked in a New York City hospital under such terrible circumstances that her sister said she called it Armageddon.

Her father is also a physician, so she would have grown up with this moral code.

“She tried to do her job, and it killed her,” he said.

The elder Dr. Breen said his daughter had contracted the coronavirus but had gone back to work after recuperating for about a week and a half. The hospital sent her home again, before her family intervened to bring her to Charlottesville, he said.

Dr. Breen, 49, did not have a history of mental illness, her father said. But he said that when he last spoke with her, she seemed detached, and he could tell something was wrong. She had described to him an onslaught of patients who were dying before they could even be taken out of ambulances.

“She was truly in the trenches of the front line,” he said.

He added: “Make sure she’s praised as a hero, because she was. She’s a casualty just as much as anyone else who has died.”

When patients die in the ambulance, on stretchers, in waiting room chairs, or after appearing to be recovering, your skills, strength, speed and teamwork still aren’t enough.

You feel angry and helpless and overwhelmed — for doing everything you know and it’s not enough.

Here’s a definition from a PTSD website run by the VA:

In traumatic or unusually stressful circumstances, people may perpetrate, fail to prevent, or witness events that contradict deeply held moral beliefs and expectations (1). Moral injury is the distressing psychological, behavioral, social, and sometimes spiritual aftermath of exposure to such events (2). A moral injury can occur when someone is put in a situation where they behave in a way or witness behaviors that go against their values and moral beliefs.

Guilt, shame, and betrayal are hallmark reactions of moral injury (e.g., 3). Guilt involves feeling distress and remorse regarding the morally injurious event (e.g., “I did something bad.”). Shame is when the belief about the event generalizes to the whole self (e.g., “I am bad because of what I did.”) (4). Betrayal can occur when someone observes trusted peers or leaders act against values and can lead to anger and a reduced sense of confidence and trust (5).