One of the things that marks a hard news journalist is that, for better or worse,  we wear, and take pride in wearing, a sort of emotional armor.

I started my professional writing career at 19 and even then was assigned some emotionally difficult work — like a story for a national Canadian women’s magazine interviewing women much older than I who had survived harrowing experiences: one whose house burned down, one who had a double mastectomy and one whose husband died in front of her.

But I did it  — turning down offers of well-paid work is dicey when you work freelance.

The very nature of hard news journalism — whether you’re writing or editing or taking photos or video  — means you’ve chosen to cover the world and the many things that happen to other people, some of which are simply horrific and traumatic, for them and for us.

The biggest stories, the ones that make front page or gain millions of page views online, are often the ones that can also exact a heavy toll on the people producing them, no matter how calmly they appear on-camera or taking notes. 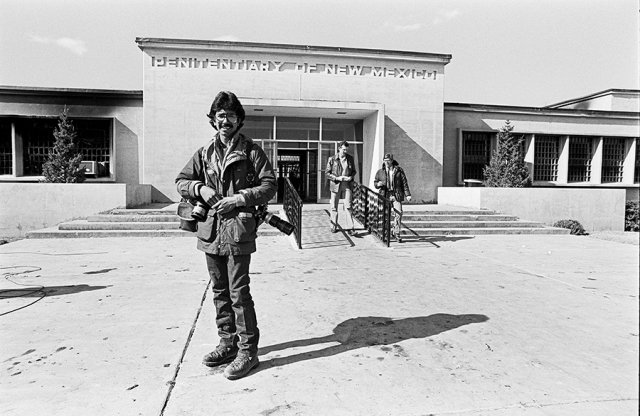 Jose Lopez (my husband) at 23, on assignment, decades before we met

The interior of the prison after a riot and many murders

I’ll spare you the details of what transpired, but they are the stuff of horror films.

It traumatized him, but he had chosen to become a news photographer, and it can come with the territory.

In later life, for The New York Times, he spent six weeks in the winter covering the end of the Bosnian war. His Christmas meal was a bowl of soup and one night he even slept in an unheated shipping container. When he finally left, initially flying into Frankfurt, he remained scared to be out after dark, his protective war instincts still functioning.

By definition, stories like this push us without warning or preparation into frightening, even horrifying situations, while demanding we  shove our personal reactions — fear, anxiety, grief, despair, confusion — into a sort of lead-lined box so we can pay full attention to our work. To witnessing and reporting what we have been sent to cover. To telling the story accurately and in detail.

The day before my driving test, age 30, I covered the aftermath of a head-on collision between a bus and a small car on a Montreal bridge. I’d like to forget what I saw decades ago, and cannot.

My editors told me I was the only reporter to have gotten close enough to the wreckage to get the make and model of the car.

Not really “another day at the office”…

I’ve cried maybe once while in public covering a story, (the funeral of a young girl who was raped and murdered in Toronto), and have since covered many stories that left me shaken and upset, sometimes as upset as the people I spoke to — like those I wrote after 9/11 and a Canadian national magazine story about women who had suffered a severe side effect from taking the drug Mirapex.

The larger challenge, and burnout and PTSD are very real in our industry, is if, when and how we do finally acknowledge and process those complex emotions.

I’ve never studied journalism and have never been trained in trauma reporting. which de facto means  you’re asking people who have faced trauma — rape, war, conflict, natural disaster, a shooting — to discuss it in detail with you, a stranger they have never met before.

But I’ve done a lot of it and I know it’s changed me. I don’t think for the worse, but it does stiffen the spine and harden your heart. I don’t mean you stop caring or don’t feel compassion for the people you are writing about.

It does mean, to stay sane and productive, especially on tight deadlines, having the ability and self-discipline to create and maintain a critical, detached distance from whatever is distressing — physically, emotionally and intellectually. No matter how terrible the details, we need to learn and share them.

So it’s one of the reasons I miss being around other career journalists, because we all know what the work requires and there’s an unspoken sort of code about it all.

It’s not really like most other jobs in this respect.

Jose and I were talking about this in regards to our unusually phlegmatic reaction to the endless death rate from COVID.

We sleep well at night.

We don’t spend a lot of time discussing it, or listening to (in fact, actively avoiding)  Trump — because there’s nothing we can do right now to change any of it.

I see a lot of people complaining, daily, that they suffer insomnia, anxiety, grief.

If you’ve lost your job, income and housing, I get it!

If you’ve lost someone to this terrible disease, I get it!

But if you’re marinating in anxiety, I question the utility.

We can, unless we are in truly dire shape, control our moods and reactions.

I have since posting this been told that many people with chronic anxiety are managing this with much greater difficulty and this post seems unfeeling or uncaring about their issues.

We all handle things differently.

I leave this medical insight here as well, from The New York Times:

Underlying these stress-induced changes are hormones like adrenaline, noradrenaline and cortisol that can cause trouble if they persist too long in our circulation. Sustained anxiety increases the risk of cardiovascular disease, digestive problems, clinical depression and, ironically, infectious diseases like Covid-19 by weakening the immune response to a viral infection.

“The stress of Covid-19 is now acute, but if it persists long after April, which it likely will, it will take an enormous toll on world health,” Mr. Ropeik said.

Thus, in addition to heeding the recommended personal precautions to avoid an infection, people feeling unduly stressed about the pandemic might try to minimize the damage caused by unmitigated anxiety.

A psychotherapist I know has advised his patients to limit their exposure to the news and discussions about Covid-19 to one hour a day and, if possible, in only one location, then use the rest of the day and other parts of the home for productive or pleasurable activities.

8 thoughts on “Why emotional armor is useful now”