I’ve been home from Fireside now for only four days…but like many of my fellow attendees, here in NY, in Toronto and beyond, I’ve been chatting with many of them via our Slack channel, Twitter, FB, LinkedIn and email.

I’m still processing so much of what I saw, heard, felt and shared, both emotionally and intellectually.

Here’s a great piece about it by one of my cabin-mates, Michelle Manafy, for Inc.com:

being away from the safe and familiar surroundings of home helps campers build new strengths that empower them in whatever they do.

At Fireside, attendees not only have to live without the reassuring buzz of their phones, they also have to forgo conference hotels to share cabins with strangers, sleep on bunks made for kids, without heat in weather that dips into the teens at night. Despite excellent food and well-stocked campfires it is, without doubt, both physically and technologically, uncomfortable.

Yet what occurs is nothing short of magic, warmed by campfire light and reflected in the kind of star-filled sky you only see far from the pervasive light of so-called civilization. People make eye contact. They introduce themselves. They watch speakers without the distraction of tweets or email. They walk and talk in twos and groups, reflecting on what they’ve seen and heard.

So why did this brief stay in the woods create such quick, powerful connections?

Without the usual conference trappings of badges and lanyards proclaiming your cool/hip/prestigious affiliation(s), without the status-signifiers of the right clothes/shoes/handbag, we were all just..people.

You couldn’t pull the usual thing (so rude!) of looking over someone’s shoulder for the more important contact because the person talking to you might, in fact, be it.

As one man said — “Everyone here is an onion.”

So much of our lives are now relentlessly tech-intermediated — whether emojis, texts, Snapchat, Instagram, Slack, FB, FaceTime, Skype. It’s now radical indeed to just sit, maybe for an entire hour — as I did several times there, and others did as well — and speak at length face to face with someone you’d never met before.

It’s also a radical act — in an era of relentless, isolating and demoralizingly competitive social media preening — to just speak openly and honestly about your real struggles, whether emotional, financial, physical or professional, maybe all of these!

During the conference, even the most successful among us spoke bravely and boldly about their frequent battles with anxiety and depression, their need to appear 10000 percent strong and in charge of it all, for fear of losing employees, investors, sales and street cred.

Few things are as powerful as truth and trust. 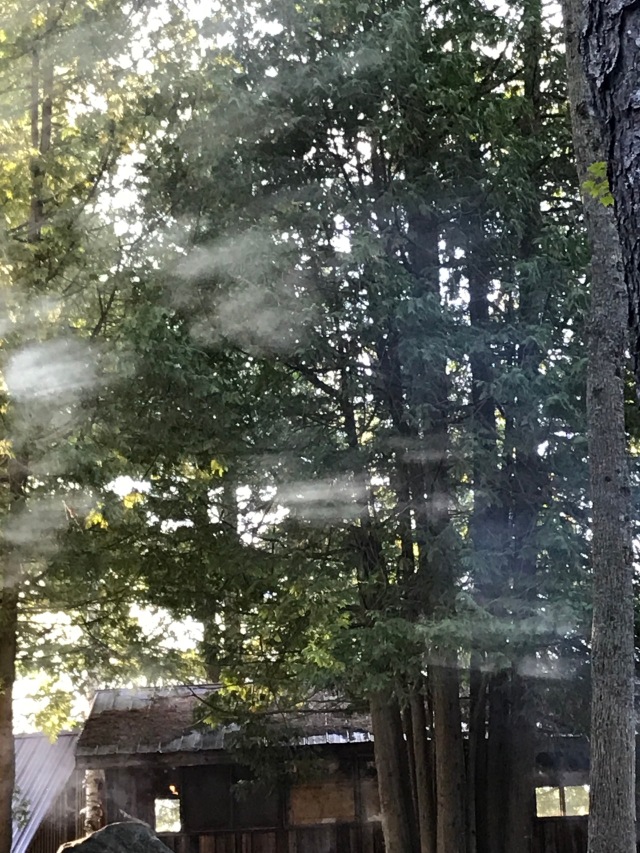 Being outdoors night and day

Dusty shoes, mosquito bites, sunburned noses. (You should see the bruise on my left calf from ungracefully exiting the canoe!)

Just being outside, not staring into damn screens all the time, in fresh air, smelling wood-smoke and pine needles and watching a sunset and hearing a loon’s haunting call…so restorative! 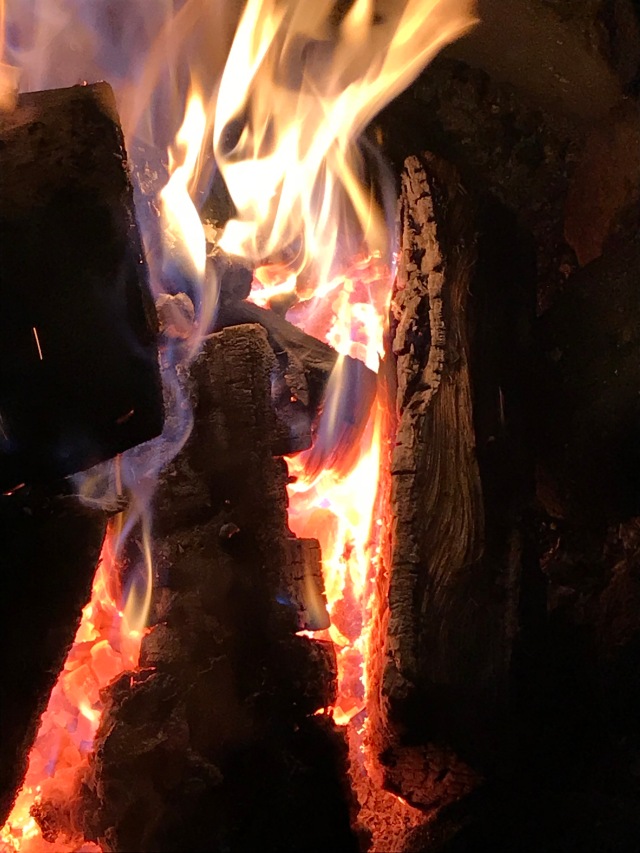 It’s pretty primal stuff to sit around a fire, blazing or glowing, and stare into its embers. We’ve been doing it as a species for millennia, yet how often do we do it with strangers? It’s harder to bullshit and posture when the smoke is in your eyes and someone just handed you a gooey marshmallow on a stick.

One of the ways the conference organized us was into “campfires” where a group of experts would gather in a public spot and just…extemporize.  We were all there to be resources for one another.

That takes expertise and confidence in your skills and social poise (I did one, with several other journalists) but it’s also down-to-earth and freeing — no mic, no video, no lectern, no notes.

Willingness to brave something completely unfamiliar

I was really nervous!

This was not my usual crowd (all journalists and writers of non-fiction) but a wild mix of ages — 20s to 60s — and included start-ups, a few billionaires, tech bro’s and people I had to talk to (giving presentations) and with. What if they were cold or dismissive? (not!)

It was a long long drive from my home an hour north of NYC to the camp, about four hours’ drive north of Toronto. What if the food was lousy? (it wasn’t!)

I think many of us first-timers had to be a little brave. You couldn’t just flee and go catch a movie or flick through your Insta account for distracting comfort.

Props to the two young Toronto lawyers, Daniel Levine and Steve Pulver, who invented this thing. 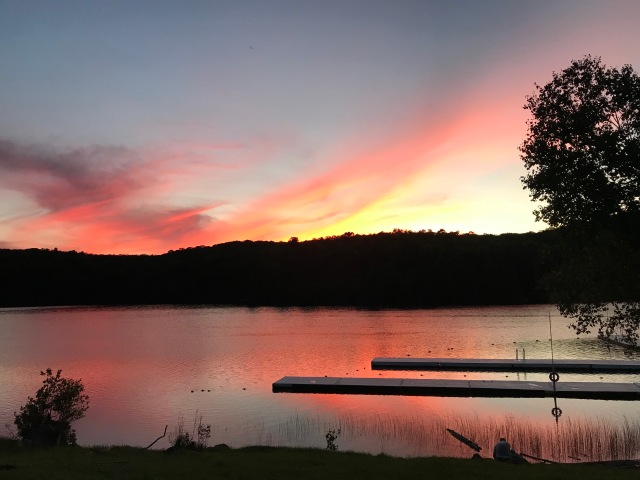 Imagine the smartest and most interesting people you’ve ever met.

Four hundred of them.

In the woods, sleeping for three nights in unheated cabins at a summer camp more than three hours’ drive north of Toronto, on a huge private lake.

I just spent the most tiring, intense, exhausting, interesting four days of my life — and, maybe like you, I’ve been to many conferences over the years.

This is invitation only, and I was invited (free), waiving the $2,500 (Canadian) standard fee; I spoke twice during the event on how to tell stories, as many of the attendees run their own companies, many of them start-ups and many have no idea how to find and work with the media to promote their products and services.

The age range was 20s to 60s, about 70 per cent male and probably 60 to 70 percent Canadian, from all across the country. One man came from Cyprus and others from far away in the U.S. , even Spain.

It was a wildly eclectic mix of talents and skills — from a male performance artist to a young female cryptocurrency business owner, from the female Alabama owner of a pet-sitting company to about eight other journalists.

Of the 400, about 150 were returning from prior Fireside Conferences.

Because it’s held at a camp, the remote wooded 750-acre setting is simply gorgeous and the amenities fairly basic — the cabins have no heat and it was cold (like 40 degrees F) at night.

We all ate breakfast and dinner in the dining hall; unlike camp, there was plenty of free alcohol provided by sponsors. We were woken up at 8:15 by music broadcast through speakers and at night many of us congregated around small stone-ringed campfires and made s’mores.

And the stars! I hadn’t seen the Milky Way in years. 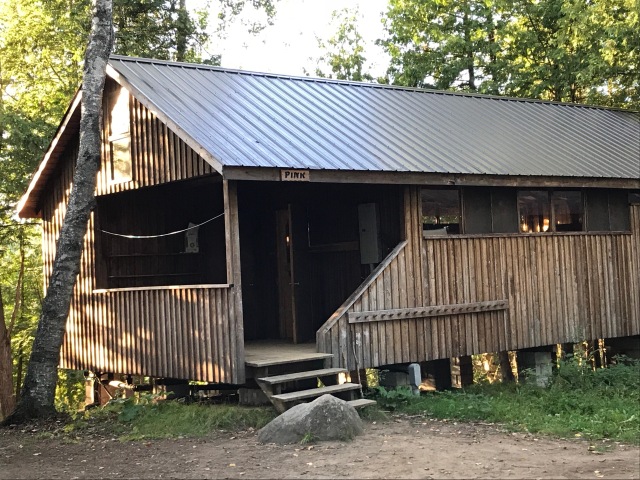 Our cabin — I shared it with three other women, all of them strangers (now good friends!) — no heat!!! Bunk beds.

No one wore a badge or lanyard. Almost no speakers used or needed a mic — instead we sat on a bench or on the grass to listen, creating an intimacy that was immediate, unusual and powerful as we often engaged in long, private, sometimes very personal conversations.

Unless you’d been there before, you probably arrived, as I did, a little nervous — and didn’t know who anyone was, meaning you just had to engage in conversation and you could be speaking to a self-made millionaire or a grad student, a musician or a photographer or a mother of four.

There was a cabin where you could access it but this meant tremendous personal interaction without the absurd constant distraction of cell phones and notifications.

We could also — in addition to dozens of speakers and panels — enjoy classic camp activities: sailing, canoeing, kayaking, water skiing, archery, tetherball. I canoed solo for a bit.

My brain is swirling — I was invited to, also did, a podcast there, and may be invited to speak at some other conferences thanks to some contacts I made.

And so many new friends.