There are times that a deeply personal and private experience intersects with the larger culture. In journalism, it’s called the hook or the news peg, i.e. since everyone is now talking about it or thinking about it, it’s worth discussion and an assignment.

And my primary goal, often, for writing about a topic, especially a difficult and painful one, is to be of service, to comfort and to connect people to others who know their journey and who truly understand.

To explain to those who don’t understand and might become less judgmental as a result.

My mother Cynthia died Feb. 15, 2020 in a nursing home in Victoria, B.C. a seven-hour flight from our home in suburban New York. We had not spoken in a decade and even though I sent cards every Christmas and included a newsletter, no reply.

But we had also had some very very bad ones.

She had been through so much in her life, including divorcing my father when she was 30, traveling through Latin America alone for years, living alone in such places as London, New Mexico, Mexico, Bath, Montreal and Toronto, surviving multiple cancers. She never re-married.

Intimacy was not her strong suit.

So, have I grieved this loss? Yes and no.

Which is why I wrote this story for The New York Times, probably the most revealing and personal words I’ve ever published there.

I’m actually a quite private person, and choosing to discuss painful issues before millions of readers worldwide is objectively somewhat frightening.

Here’s some of it:

When the phone call came from my mother’s nursing home, I knew there could be only one reason. She had died at 85, sitting in her armchair watching television.

I was her only child, but we hadn’t spoken, or even tried to be in touch, in the previous decade. She was a Mensa member, a world traveler of independent means and a voracious reader. She was also bipolar and an alcoholic. Worn out by decades of dealing with both, which meant years of chaos and broken plans, I had finally, reluctantly, exhaustedly, just given up trying to have a relationship.

For every anguished iPad farewell made to a dying Covid patient, or during another Zoom funeral or someone dearly loved and mourned, there are many people like me, estranged from their parents, children or siblings when those family members pass away. And because of this, we may not grieve the same way people typically expect. For some, the end of an unhappy and complicated relationship just comes as a relief.

As I write this, the story has gathered 49 comments, and they are so so painful to read, as so many others share their stories.

I was stunned to see how many people — through Twitter and Facebook — praised the story’s honesty about such a difficult topic and how many people struggle with estrangement in their own families. I had no idea.

It’s very hard to be estranged from a family member, as I still am from a half-brother who is 23 years my junior and father of year-old twins, a boy and girl I may never meet.

It’s also hard because it’s really taboo to admit you don’t speak to your mother or father or siblings or any of them. The myth that “family” equals love is a strong one. Those of us who don’t have that experience seek out others who get it. Our husbands and wives and best friends know. Our therapists know.

But it tends to remain secret and private because you can never trust someone new not to gaslight you or deny your lived experience since theirs has been so happy.

There is a great deal more detail, of course, I couldn’t include in this article. There are more characters and more history.

But the gratitude readers have shared has been deeply moving.

A long ago image, one of my favorites

I found out Sunday and immediately knew, seeing the nursing home’s name on caller ID, what this was.

A call I dreaded, but knew was inevitable at some point.

She had not been ill, although she had many health issues — COPD, a colostomy, survivor of multiple cancers. She was 85.  I am her only child and we had been estranged, again, since 2010, for many reasons. Her alcoholism was a major one for me. I was worn out competing with it.

She was also bipolar and her manic episodes, certainly when I was in my teens and 20s,  were terrifying, often resulting in hospital stays around the world as she traveled. I was 19, living alone and attending university, and would find calls on my answering machine from consular officials, from the Americans (she was) and Canadians (I am) asking me what to do.

She had been in a nursing home since 2011 when she became too ill to live independently. She lived, at the end, in Victoria, B.C. as far as one can get from my home in N.Y., another obstacle to visits, even if wanted.

Which we often didn’t want.

She had previously lived in many places, including Roswell, NM, Woods Hole, MA, Toronto, Montreal, Bath and Gibsons. B.C. where she joined the volunteer sea rescue crew, bouncing around in a Zodiac and tending her garden.

In Victoria, she had a dear friend locally who will  take her things for now, and who is executor of her will. She will be cremated and I’ll likely go out in a few months to take her ashes back to the part of mainland B.C. she wants them shared. Sadly, there are not enough people to make a funeral or memorial.

I am a stew of emotions, as anyone who’s read this blog for a while knows.

Cynthia had, in many ways, an amazing life, blessed with Mensa-level intelligence, beauty and enough inherited money she didn’t have to work after her 40s.

She traveled the world alone, even to remote Pacific Islands, and made friends in Australia, England and in Canada, where she moved from New York when she married my Canadian father — at 17. They met in Eze-en-Haut, France at a party, and barely knew one another before marrying at St. Bartholomew Cathedral on Park Avenue in New York City — two wealthy, charming, strong-headed people…who made me!

They were quite the pair and we moved to London from Vancouver while my father worked for the BBC making films. She was adventurous all her life.

She never attended university but worked as a radio reporter, TV talk show host and magazine editor and writer.

She met her lifelong best friend, an East Indian travel agency owner in Toronto, Molly, when she interviewed her for a story.

She had a wardrobe of wigs, sometimes changing her hair color several times a week.

Her black mink had a brilliant emerald green silk lining.

She was glamorous as hell — and also fiercely independent and private.

I knew very little of her.

I was sent to boarding school at eight and summer camps ages 8-14 when I left her care to live with my father. We had lived in Toronto, Montreal and Cuernavaca together.

I never lived with her again after that.

Because she always lived so far away, or vice versa, we saw one another maybe once a year. As she traveled, she would import me once a year to wherever she was at the time: Peru, Colombia, Costa Rica, Fiji.

Some years went by with no visits, due to rancor.

The closest we were, emotionally and physically, was the year I was 25 and living in Paris on a journalism fellowship and she was living, as always alone, in Bath. We saw one another more often then.

She taught me to play gin rummy.

To travel safely as a woman alone.

To set a pretty dining table.

To fight hard for what you believe in.

To talk to anyone interesting, anywhere.

We played ferocious games of jacks — her long fingernails, she knew, a competitive advantage

Ooohhhhh, we were competitive! 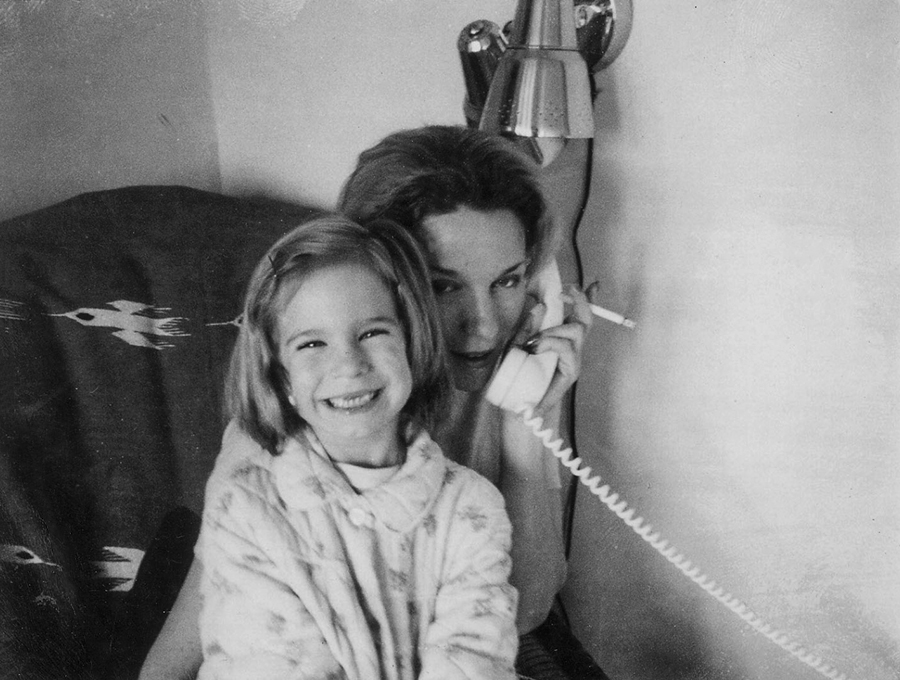 That’s me, maybe age five or six, in Toronto.