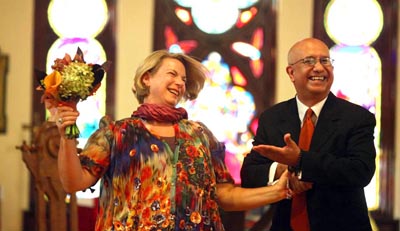 The image is our wedding, in September, 2011, late afternoon, in a small wooden church on an island in Toronto’s harbor.

We met in March 2000, online, and after our first date at a lovely French bistro in midtown Manhattan, that was it.

We couldn’t really be more different. Jose — an American, the cherished only son of a small-town Baptist minister, loves routine, security and familiarity. I — Canadian, the oldest child of a film-maker father and journalist mother, globe-trotters both — live for adventure, new experiences and spontaneity.

But we’re still delighted to have found one another.

Here are 14 reasons why:

We laugh our asses off

People look at us on the commuter train, where everyone else is quietly reading the paper, or snoozing, or texting. What’s so funny? Anything, really.

We talk to one another, every day, a lot

His workday — as a photo editor for The New York Times — is crazy-hectic, with six scheduled meetings every single day. He juggles assignments for photographers, staff and freelance, literally across the world, and speaks to dozens of editors and reporters. Sometimes he’s even emailing at 3 a.m. to a guy in China or India. But we chat, even for a minute or two, several times every day. I want to hear his voice, share a triumph and connect. When we’re home, our computers are (mostly) off and we eat our dinner by candle-light and catch up. Studies have found that the average couple speaks very little during most days. I find that really sad.

We have very different interests

I’m a culture vulture, forever seeing museum and gallery shows, theater and dance, coming home from the library with a pile of books. He’s a devout Buddhist who meditates every morning and reads his texts. But we have enough overlap and mutual curiosity about one another’s interests.

God, that man works hard! So do I. As I write this, it’s another major blizzard here in New York and he’s working from home. We attach to our computers and phones and go. He’s seen my freelance workday up close, and knows how intense and focused it is. We are both career journalists who started selling our work to national outlets while we were college undergrads. We enjoy our work and know why it still matters, to us and to the larger world.

We have one another’s backs

He has verbally taken both of my parents to the woodshed when needed, hotly defending my needs and concerns when I just couldn’t seem to do it myself. I’ve done the same for him with neighbors or anyone, anywhere, who disrespects him. He is Hispanic and has been mistaken for a manual laborer, when wearing his casual clothes. The man has a Pulitzer prize. I tell people that. He tells them about my accomplishments. We are absolutely one another’s best advocates.

We both have spiritual lives, individual and shared

He is a devout Buddhist, who had an altar and prayer flags hanging in his Brooklyn apartment when we met. I’ve been attending a local Episcopal church since 1998. We’ve attended one another’s services and appreciate and respect our individual traditions and choices. I’ve seen, and been touched by, how connected he is to his guru, Lama Surya Das, now a friend of ours, and we’ve invited our church ministers home for dinner.

We treasure our friendships

I love his loyalty to friends. We keep our friends close, even when they live many miles distant.

We take care of one another

After my left hip replacement, in February 2012, Jose took three weeks’ vacation time to stay home and nurse me. He made an enormous list of all my pills and exercise schedule and stuck it on the wall. He cleaned my wound, all 12 staples of it. I make our home as clean and attractive as possible: candles, fresh flowers, pretty linens, a beautiful table for mealtimes. I make us delicious meals, when I can muster the energy. I even brush and polish his shoes, much to his embarrassment. It’s just care. It’s what a good marriage is about.

We’re not scared to have a (loud, scary) argument

This was a big step for us. We fought like crazy for years when we met: stubborn, mid-life, long divorced, battling for recognition and respect in a dying and difficult industry. It’s not easy to allow someone new into your life after you’ve already had a few decades of one. He also grew up in a family that never (visibly) argued. It’s almost all mine did. That was an adjustment.

When we do, we know it doesn’t mean the end

That was another big step. For a variety of reasons, I’m a little (OK, a lot) freaked out by possible abandonment. He never once stomped away in silence or shut me out for days or weeks, as some men might. While we were dating, we both left one another’s homes in fury but we also made up the next day, after we’d cooled down. Just because we fight sometimes doesn’t mean we don’t love one another deeply.

We save a lot of money for our (we hope!) shared future

I save 15 percent, which I hate. He saves 10 percent. I want a comfortable retirement. The only way toward that is saving a shitload of money.

Once you’ve tasted the bitter fruits of a nasty marriage and even nastier divorce, marriage can terrify you. It scars you and scares you. It’s expensive and miserable and confidence-shaking. Why even bother doing it again? My maternal grand-mother married six times — maybe eight — we lose track. My parents’ marriage busted up when I was seven and my mother never re-married or even lived with another man. You have to really want to be married and do the work it takes to stick around.

We know we have a lovely thing going, and tell one another this often

We both say thank-you a lot, and mean it. I never take him for granted. Life is too short to waste it being horrible to the person you have taken vows with.

How’s your love life these days?