As our governor Andrew Cuomo said at his daily press conference yesterday — we’re only on day 57 of self-isolation to slow the spread of COVID-19, still claiming more than 400 people daily in New York City.

Staying home and doing our very best to not further spread this terrible virus has already saved 100,000 lives, he said.

But it’s not the most fun staying indoors all the time.

How sick are you of staring at the same four walls?!

Time for a zhuzh?

Even though some of our freelance work has dried up, we’ve spent a bit (about $200) on some micro-fixes to our one-bedroom apartment, desperate for a bit of visual relief and freshness.

Here’s the new bedside rug I scored on sale from Bed, Bath and Beyond:

The duvet cover is Pottery Barn, from a few years ago

We also bought a fresh set of bedsheets, a new sink mat for the kitchen and a new shower mat for our bathtub — to my horror and annoyance, the spray-on white surface we had done last year on our 12 year old tub is now bubbled and peeling off in sheets. It’s disgusting and will now be a long time before we can have anyone in to re-do it.

I’m buying fresh flowers every week as usual, doing lots of cleaning and polishing and we re-arranged our living room gallery wall: 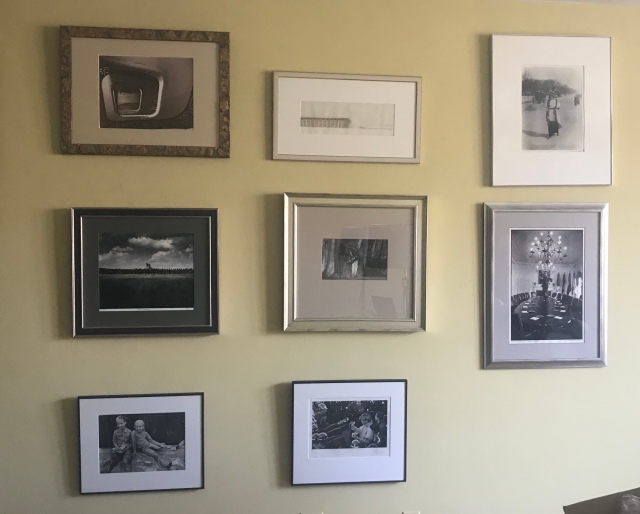 l to r, top row: my own image, Paris; a colored pencil drawing by a Canadian artist; a print by Henri Lartigue of early Paris

bottom row, l to r: Me and a pal in a food photo shoot in the 60s; Bernie Boston’s classic anti-war image

We’re even considering a complete re-do of our hallway/living room wall color…unchanged for 13 years. That’s a huge commitment — not so much of time (we have lots right now!) — but finding a color what will work with our current furnishings and accessories. A creamy beige would be bright and fresh…but also boring as hell.

The current color, now discontinued but we can order more, is Gervase Yellow by Farrow & Ball.

Here’s the view from our bed.

The color’s a bit off — the poster is black and white, not  yellow. It’s one of my most treasured possessions, bought on my first honeymoon decades ago. My husband and I spent a day at the Pont du Gard and came back to find the trunk of our rental car broken into and both suitcases, with every stitch of clothing and toiletries, stolen. Thank heaven, they didn’t bother with the interior, where they would have found this.

The curly metal mirror I bought in Halifax in the 80s, the antique Chinese jar-lamp in rural Ontario at an antique shop and the chest of drawers decades ago at an antiques show. The black and white photo is Jose’s family, pre-Jose.

We’re very glad we invested in renovating our kitchen and only bathroom (bathroom, 2008, kitchen 2013) as to be stuck 24/7 living in a place that’s dirty or in crappy condition, is really depressing.

I’m also grateful we only share the place with one another, and not — as many New Yorkers do — with multiple kids, now home all the time, and pets. It’s tough enough fighting cabin fever since our daytime temperatures are still in the 40s F (!) and it’s raining  probably five days out of seven, which is so damn confining!

If you’re seeking affordable inspiration, Apartment Therapy has many global images and projects, many on tight budgets.

Have you made any changes or done any projects to keep you busy and cheer your home up a bit?

She’s been writing funny and revealing stuff about her life for a long time — once famously confessing in The New Yorker that she couldn’t afford to live in Manhattan; that piece became the title of her book of essays,“My Misspent Youth.”

Her new book “Life Would Be Perfect If I Lived In That House” has a title that sums it up.

It’s the American Dream. (That’s one of those phrases Americans — and their realtors — take for granted. There is no corresponding Korean or French or Canadian “dream” of owning your own home, preferably a little colonial with a lawn and a backyard. Other countries don’t allow mortgage interest as a tax deduction.)

The fantasy of a life transformed is what makes the ads and features in interiors magazines so enticing—no fashion or celebrity magazine glamorizes its subjects as thoroughly as Architectural Digest or Elle Decor—and what gives HGTV’s low-budget shows their addictive appeal. The longing for the perfect life in the perfect environment can make real-estate listings and “For Sale” signs as evocative as novels. This domestic ideal gives today’s neighborhoods of foreclosed or abandoned houses their particular emotional punch. A stock-market bubble may create financial hardship, but a housing bust breaks hearts.

Although Ms. Daum did buy a house in 2004 and watched its value rise and then fall, her self-deprecatingly funny memoir isn’t a tale of real-estate speculation. Rather she uses her lifelong obsession with finding the ideal living space to probe domestic desire, a deeper restlessness than the search for quick profits.

Whether because of alienation or ambition, Ms. Daum’s family, when she was growing up (first in Austin, Texas, and then in New Jersey), shared “a chronic, lulling sensation of being aboard a train that was perpetually two stops away from the destination we had in mind for ourselves.” That feeling manifested itself in a “perpetual curiosity about what possibilities for happiness might lie at the destination of a moving van.” The result was a childhood filled with weekend trips to visit open houses, dinner-time conversations about relocation and, in Ms. Daum’s teenage years, her mother’s sudden move to her own home: “four walls whose color scheme required approval from no one. It wasn’t another man she wanted but another life.” (Ms. Daum’s parents did not divorce.)

I’ve been living in the same one bedroom apartment since 1989. Will I ever own a house? Not anywhere near I live now — a nasty little shoebox with .25 of an acre on a busy street would run me $500,000 with $12,000 a year in taxes. I’m hoping to buy one, or at least rent one, in France in retirement, and living in 1,000 square feet (about the size of an affordable house in my town) allows me the extra cash to fly to France in the meantime.

My Dad has been scouting houses in coastal Maine, trying to figure out what to do with his. I know a house is a major dream for millions of people and you need a space with room(s) for kids and their toys and pets and activities. We lived in a house when I was little, and when I was in high school, but, other than my rental on the top two floors of a Toronto house, and our rented apartment in an old house in rural New Hampshire, it’s been apartment living since then for me.

There are some amazing houses in my town, one, a huge shingled Queen Anne painted the pale pink of strawberry ice cream with green shutters and several with wisteria trees snaking up across their verandahs and eaves. There are one or two I would love to live in, but could never afford them.

I really love our apartment. I’ve re-painted it a bunch of times, especially since attending interior design school. We have astonishing views northwest up the Hudson and I have hawks and geese and crows swooshing so low over my top-floor balcony I can hear the wind through their wings. I love the light and quiet and feel blessed to own my own home. Its small-ish size and manageable mortgage makes me feel safe, even while working in an industry shuddering through insane and terrifying changes.

I basically see a house as a money pit, something that endlessly needs upgrades and repairs, mugging you financially when you can least afford it — new boiler! new roof! new driveway!

How about you? Do you love your house?

OK, that thing over there is a toolbox. Those things are for fixing stuff. Yourself.

There’s an X-acto knife, scissors,  a hammer, pliers, two wrenches, three screwdrivers and a tape measure. I have three red toolboxes, love them dearly, use my many tools as often as I can possibly dream up yet another project.

I loved this piece in today’s New York Post about all the ways you can DIY (do it yourself). Even Peter Gabriel, back in 1982, wrote a song about it.

I’ve designed and built bookshelves, a folding screen, tables. I’ve hammered, sawed, painted, plastered, sanded, drilled, urethaned (is that a verb?), stripped floord an What some women spend on shoes, I spend at my local hardware and lumber stores. I love working with my hands and making stuff.

Many of us are running out of money — and those without jobs or enough work have now got a lot more time on our hands. So put a wrench in one of them and get to know your home a little better.