According to Urban Dictionary, that’s what moms tells their overweight sons to soothe them — “You’re just husky.” 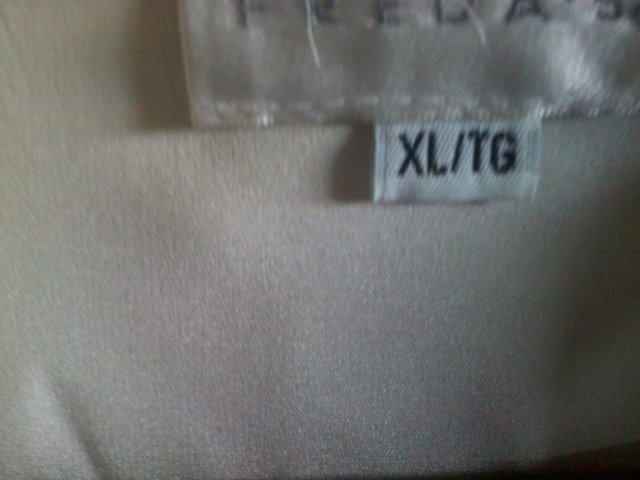 Here’s a recent blog post about what larger women prefer to be called:

For the survey, Sonsi questioned 1,000 women. Among the most interesting findings: While the vast majority of plus-size women (85 percent) say they believe that beautiful bodies come in all shapes and sizes, fewer than half (49 percent) say that they embrace their own curves. That, Mongello added, signals “a confidence gap among plus-size women.”

Angela O’Riley, a longtime plus-size Ford model, stylist and fashion consultant, told Yahoo Shine that she wasn’t surprised. “It’s deeply ingrained, this fashion thing. We’re all socialized from a very young age to look at fashion magazines, but nobody looks like us, so it’s exclusionary, and it sets up a vicious cycle of ‘I’m no good,’” she said. “It’s a psychological study when you make clothes.”

Regarding terminologies, 28 percent of those surveyed said they most liked the term “curvy,” mainly because their curves help define who they are. “I actually prefer ‘curvy,’” O’Riley said. “It has such a positive connotation. If you used it to describe a friend, no matter what her size, you’d think, ‘Oh, she’s delicious!’ It’s empowering instead of diminishing.”

Still, 25 percent liked “plus size,” while another 25 percent went with “full figured,” with some great write-in choices including “normal,” “average” and “beautiful.”

I think a much better idea would be to stop obsessing about the size or shape of women’s bodies.

It’s really only a matter of concern between a woman and her physician(s.)

Calling a woman who is larger than a size 12 “plus-size” is really fairly bizarre — do we (yes, I’m one of them) call leaner women “minus” size?

How weird would that be?

Enough already with the normative shaming and labeling.

Some of us are bigger than others, whether temporarily, (post-pregnancy, injury, medication side effects,) or permanently. Some of us are leaner.

It just means your clothing labels are a lower figure than those of us on the dark side of size 12.

In my world, the size and consistent use of a woman’s heart and brain (i.e. her compassion and intelligence) far outweigh the girth of her upper arms or the jiggle of her belly.

I’ve met way too many skinny bitches to be persuaded that the most important element of our value to the wider world lies in the size of our thighs.

Here’s one of my writing pals, Taffy Brodesser-Akner, a mother of two in L.A., writing in Ladies Home Journal:

So I’ve reached some uncomfortable conclusions: There is no future in which I lose weight and it stays lost. As that realization sinks in, I put my head on my desk. It stays there for an hour.

But why am I so despondent? Over the time wasted? The money thrown away? Yes, and more. I’m crying for the shame I’ve felt, the sins I’ve committed when I imagined my life to be a blinking light, on hold indefinitely until I looked the way I wanted to.

Here’s a smart post by one of my favorite bloggers — another Caitlin! — at Fit and Feminist, a woman I doubt is anywhere near overweight, and yet…

If you tallied up all of the time and energy I’ve spent thinking about my negative body image over the course of my teens and twenties, I probably would have been able to use it to earn myself a graduate degree.  And I have to be honest with you – my body’s “flaws” are just not that interesting.  In fact, those fake “flaws” are probably one of the least interesting things i can think of.  There are so many books to read and essays to write and conversations to have and things to try and skills to learn and social justice battles to wage and adventures upon which to embark!  This world is full of fascinating and miraculous things!

The cellulite on the back of my thighs – who cares about that in the grand scheme of things?  If I care at all about my thighs, it’s because I want them to be strong enough to do things like pedal me across Europe or help me run the Keys 50 ultramarathon next year.  I really cannot be bothered at all to care about anything else.

Between the creation of the pilot in 2011 and today, Wilson appeared in seven films, including Pitch Perfect, in which she played Fat Amy. Pitch Perfect made Wilson an emerging star: Her character, who may be the first woman in films to acknowledge her excess weight without complaint or unhappiness, is riveting. Fat Amy sings in a big, anthem-worthy voice, she invents her own mermaid style of dancing, and she is a glorious role model without being, as Amy would say, “a twig.” “Rebel is revolutionary,” O’Brien continued.

“Her weight is vastly overshadowed by her talent.”

As it should be.

There is upheaval in the workplace, radical change in the marketplace and a struggle for influence in govermment and society as a whole. It is a revolution of, by and for women — driven by a desire for more: for ongoing education, better ways to nurture themselves and their families, increased success as executives and entrepreneurs, higher earnings and better ways to manage and leverage their accumulated wealth.

So begins a fascinating new book, “Women Want More: How to Capture Your Share of the World’s Largest, Fastest-Growing Market” by Michael J. Silverstein and Kate Sayre, of the Boston Consulting Group.

It is a revolution of dissatisfaction in which women are using their checkbooks to vote no on large sectors of the economy, including financial services, consumer electronics, consumer durables and healthcare…Too many companies continue to make poorly conceived products, offer services that take up way too much of women’s precious time and serve up outdated marketing narratives that portray women as stereotypes.

According to the authors, women control $20 trillion of consumer spending — likely to climb to $28 trillion in the next few years. Yet only a very few companies, some familiar to Americans like Gerber and Banana Republic, really get women, they argue. These companies, they say, follow the four R’s:

They recognize the value of women consumers and research their needs, studying carefully how their product or service is consumed. Whatever feedback they get, they respond, and refine their offerings.

The worst offenders, (not surprisingly to any woman who’s ever used them) in order:

Investments, cars, banking, life insurance, physicians, car insurance, work clothes, hospitals, personal computers and lodging. I can certainly vouch personally for the first two categories. In both instances, ready to hand over significant sums of hard-won, carefully-saved cash, I was treated like a very slow three-year-old, in both instances by male salesmen. The first, trying to sell me investment products, I blew off. The second, a car salesman who started explaining the car’s features to my boyfriend instead of me, didn’t deter me from buying the vehicle, but, really, what a moron. I enjoyed watching his reaction when I paid cash.

Like men, women work hard for their money. Unlike some men, though — often also juggling what sociologist Arlie Hochschild called “the second shift” of childcare, eldercare and/or housework — they face severely limited time and energy.

As a consequence, they’re short of patience and hungry for understanding and respect  for these severe limits on their energies; anyone hoping to part them from their cash needs to get it. But they don’t. Seems pretty basic to me, but apparently few businesses still  understand these essential drivers of female consumption — or resistance to the most seductive and costly of advertising or marketing campaigns — whether in Calcutta, Beijing or Orlando.

I went to Home Depot last weekend, dreading the whole thing. I wanted to get in and out, fast. A lively, fun, super-competent sales associate named Marilyn, a woman my age, sped me through the aisles within minutes, helping me locate and buy hardware, light bulbs, lumber, a saw, hinges. I was delighted. I was also stunned. When was the last time anyone gave you such efficient, knowledgeable and friendly service?

This book, which isn’t a quick read but packed with interesting data for anyone interested in how and where women around the world spend their money,  is based on a survey of 12,000 women in more than 40 geographic areas, who were willing to answer a staggering 120 questions. Women everywhere told the researchers they’re overwhelmed, tired and worried about money; managing household finances was the top challenge for 48 percent of respondents, and not enough time, said 45 percent.

Time is the most important lever that suppliers can use to win women over to their products and services. If they can reduce the time it takes to buy or use a product — while still delivering the other necessary benefits — they can change from being an inflicter of pain and frustration to being a provider of leverage and convenience.

Check out the survey here.