I grew up in Toronto, a city that has managed, except for a few exceptions at its most eastern and western edges, to cut off easy access to Lake Ontario.

So it’s been a tremendous joy to spend decades living on the eastern edge of the Hudson River, with terrific views from our every window.

Some of our many riparian pleasures include:

It’s gorgeous! The old one, in use between 1955-2017, was desperately overdue for replacement and finally was torn down and replaced with this stunning new version spanning the Hudson. It glows at night in lavender. Details here.

We have a gloriously clear view from our bedroom window of the exact moment the rising sun hits all the windows of homes across the river, high on its opposite shore, lighting them up in a stunning, brief blaze of red. I call it the ruby moment and love to track how that time changes with the seasons.

Sunsets are always spectacular, whether streaks of orange and purple or a single red ball dropping over the horizon.

It’s very much a working river, with plenty of big barges being shoved ahead by small, powerful tugboats. There is some sailing, kayaking and canoeing as well, with boat clubs up and down the river.

Swoon! It’s embarrassing to admit that only this year, thanks to a discount ticket and a musical I had longed to see — Into the Woods — did I finally drive 45 minutes north to this exquisite early 19th century estate that holds an annual Shakespeare Festival on the grounds. The house, painted mustard, is gorgeous from the outside (I intend to go back for a tour), and the theater was a hoot. It’s like a circus big top, with seats on 3 sides, and a sand-filled stage with three exits.

People arrived a few hours before the Broadway show, which debuted in 1986, spreading out picnic blankets on the lawn, enjoying the sunshine and spectacular river views, and starting their meals with bottles of wine and friends.

The performance I saw was fantastic, prompting a standing ovation well-deserved.

Built in 1872, this spectacular hilltop mansion — with stunning views — was the home of legendary painter Frederic Church. It’s filled with fantastic, high Victorian art and architecture.

I was married there, the first time, in May 1992, in a lovely and austere chapel right at the river’s edge — shown in period engravings — built in 1833 and abandoned in 1906. It has no electricity, just a huge chandelier lit by candles. Our Lady of Restoration is now non-denominational. From its website:

Its designer was another immigrant, a 19-year-old from England, Thomas Kelah Wharton. Built in 1833 of locally made red brick covered with stucco, the chapel was in the Greek Revival style, then in vogue. Its columns were of the Tuscan order, a simple, unfluted version of the Doric, whose supreme expression is the Parthenon in Athens..

Contemporary press describes a festive dedication, September 21, 1834, with people arriving by boat. A large choir performed, along with a band from West Point, “whose notes might be heard in the recesses of the mountains,” for dignitaries of church and state.

It’s also a spot where the river is very narrow and the landscape feels timeless, like you’ve been whisked back to 1773 or 1842.

A paean to a commuter train line?

It’s almost always on-time, with cars that are usually clean and always air-conditioned.

Its tracks — most compellingly — run parallel to, and very close to, the Hudson River.

As the train heads north from Grand Central Terminal, it skirts the Harlem River before turning north. If you sit in the window seat on the river-facing side, you’re always guaranteed one of the prettiest rail commutes in the U.S. 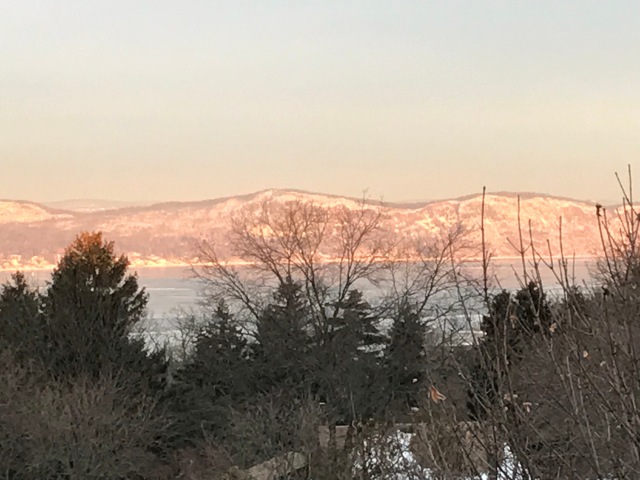 Early morning — 7:30 a.m.-ish — view from our apartment on the east side of the Hudson River. That gentle pink is the sun’s rays.

I started writing this post as I rocketed north toward Canada on an Amtrak train, its tracks right alongside the Hudson River. On the opposite side, I could see cargo trains heading south.

I’ve been living on eastern side of the river now for decades, and love it deeply.

If you’ve never been to New York or to the Hudson Valley, it’s really one of the nation’s prettiest places and I feel lucky to have landed there.

We live in an (owned) apartment whose every window faces the river, and I’ve witnessed its changing moods — fog so thick the world disappears, rainstorms sliding down the water like a Hokusai print, heat lighting flashing for miles.

Our little town has a lighthouse and, as you head north up the Hudson, it narrows dramatically, with steep, jagged rock cliffs encircled by bald eagles and red-tailed hawks.

On the west bank sits a collection of buildings, one of the country’s most prestigious institutions — West Point Military Academy. In the winter, you sometimes see its students getting on the train in New York at Grand Central, their thick gray cloaks giving them an 18th-century elegance.

The Palisades, south of us where the river narrows

The Hudson is a working river, filled with enormous barges being pushed or towed by small but extremely powerful tugboats.

You can sail, canoe and kayak on the Hudson and even swim off of some its beaches.

There are even (!) oyster beds near our town, which were carefully removed for a few years while they built the new and beautiful bridge between the eastern and western shores. 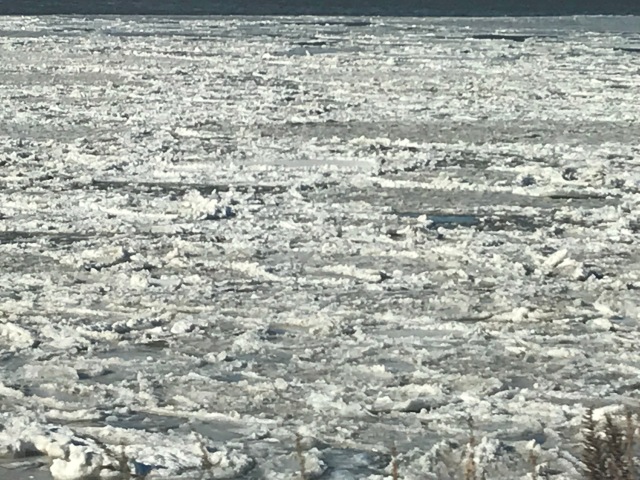 I’ve lived in cities with a river before — Montreal, on the St. Lawrence, Paris, with the Seine — but never paid as close attention to them as I do to the Hudson. 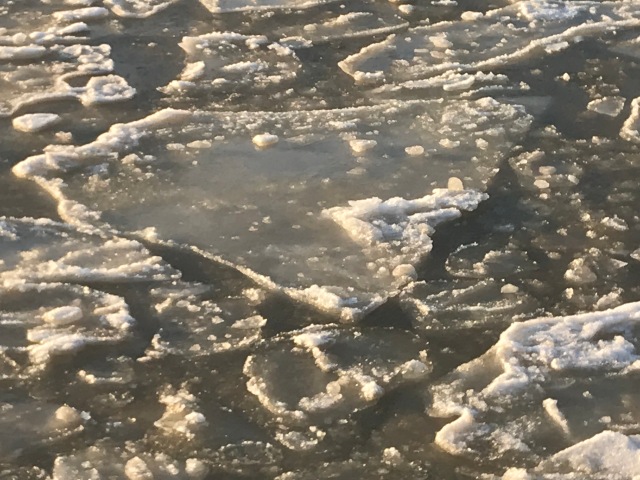 In winter, it’s equally amazing, with huge blocks of ice shuffling up against one another.

This last image is where the top of the Harlem River — and the beginning of the island of Manhattan — meets the Hudson, one of our regular views from the Metro-North commuter train, and a sight I never tire of.

The station stop where I snapped this image from the train is Spuyten Duyvil, in a fancy part of the Bronx — and in Dutch means Spouting Devil; as you may know, this was once New Amsterdam and many places around New York still bear Dutch names. (The Bronx derives from Jacob Bronck, who claimed the land in 1639.) 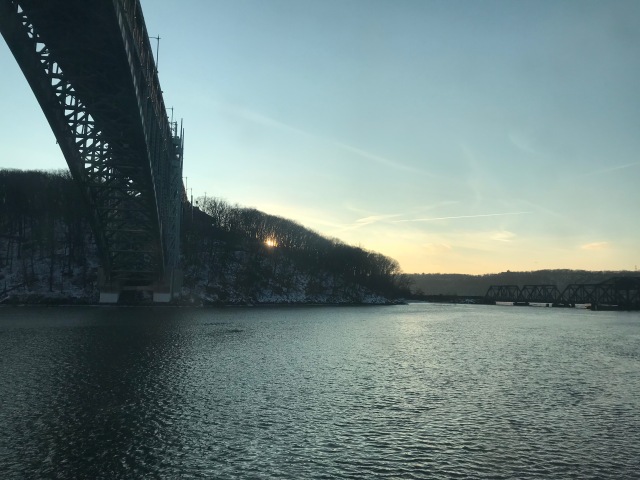