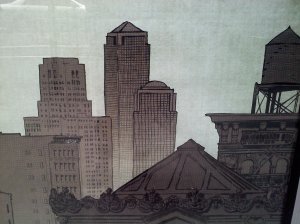 Have you ever lived — after leaving your family of origin — in shared housing?

I’ve spent the majority of my life in apartments, not a single-family house. I lived in houses, in London and Toronto, ages 2 to seven, then again from 15 to 19. That’s it.

Much as I’d love the privacy, space, outdoor space and autonomy of a house, the places I’ve chosen to live, chosen for my career in journalism and publishing. in those countries’ respective centers for same, Toronto and New York — also offer some of the world’s costliest real estate. (A good friend came by yesterday, who sells real estate in New York City, where a not-very-special apartment now runs $700,000+ while anything large or new or nice — $1 million and up.)

Until we retire, I don’t foresee owning a house. I’d rather sock that money away for retirement and travel and entertain than prop up some enormous mortgage or fear a roof repair or other five-figure disaster.

So…shared housing space is my life.

But — having just had our annual co-op meeting this week — it also means facing the many competing wishes of the 92 other apartment owners here.

Our most recent investment was an $80,000 generator for the building, needed because we get so many storms that rip down tree limbs that cause power outages. In addition to losing heat and power before, that was also costly, as we had to several times camp out in a local hotel.

Luckily, we like the neighbors with whom we share a living room wall and our bedroom wall, as well as those on our floor.

I spent one frustrating year as a volunteer on our co-op board and that was plenty — as two elderly men on the board bullied the rest of us into silence and submission. It’s a very tough job trying to balance so many people’s needs and tastes.

How’s it working out?

Here’s a chilling piece from Maclean’s — Canada’s national newsweekly — about what it’s really like to live in a condominium or co-operative building:

As thousands of homebuyers flock to condos for the promise of affordable home ownership and carefree living, they’re learning that life in a condominium is far different from the suburban houses where so many of us were raised.

Never mind that owning a condo usually means sharing your walls, floors and ceilings with your neighbours. Canadian condos are rife with internal politics, neighbour infighting and power struggles stemming from the complicated network of condo boards, owners, investors, tenants and property managers.

In some buildings, the rule book governing what owners can and can’t do with their property can span 70 pages. Disputes over issues such as pets, squeaky floors and visitor parking spots are escalating into epic and costly court battles. “They are little fiefdoms,” says Don Campbell, senior analyst with the Real Estate Investment Network, who owns several condos in B.C. “Each one has a king. Many of the people who get elected to the boards have time on their hands, and this is the only place in their world where they have power. Unfortunately, that starts to go to their heads.