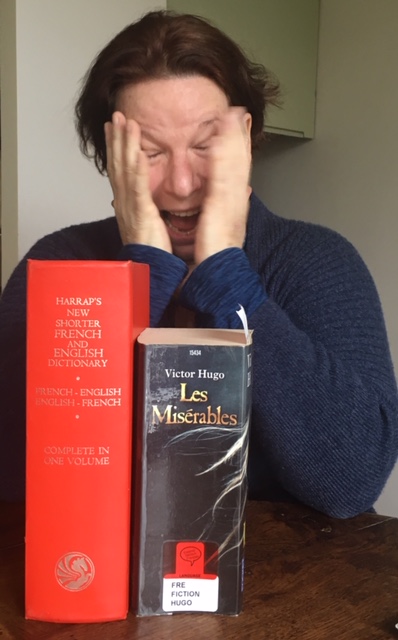 Because I need to do something with my brain that’s just for me.

I play Scrabble on the computer at the advanced level and read a lot but want to keep the old head in gear and sharpen my wits as best I can.

I studied French for three years at University of Toronto, decades ago, but only to make sure I could work in it as a reporter, which I did in my 20s and 30s.

But I never studied French literature! Never poetry! What a loss.

I’ve been watching and enjoying the BBC series of “Les Misérables”, which prompted me to get a copy of the book — written in 1832 by Victor Hugo — from our library system.

I still have my trusty French-English dictionary from college, so feel ready to go.

I read out loud to practice my accent and had forgotten what a workout it is physically to speak French! I began studying it in Toronto in elementary school and later lived for eight months in Paris and have been back many, many times.

I like to say I am fluent, and am confident in most situations that don’t demand highly specialized vocabularies (science, tech, medicine, etc.)

Have you ever read it, in any language?

Have you read other books in a language that is not your native tongue?