So it’s 11:43 a.m. and, instead of sitting alone at home at my computer — always somewhat lonely in that respect — I’m sharing a library table with three men, all strangers. To my left, a guy is working from data on death rates in Baltimore. At the adjacent tables, the age ranges from 20s to 60s, everyone plugged in, a shared cocoon of air conditioning, electric light and power.

We’ve been warned it’s likely another four days before we get power back, at least. Clean-up crews are cutting down and collecting the dead trees and branches blocking many roads, so even my drives around the neighborhood are altered as some roads remain closed.

One of my neighbors — yay! — lugged my ice chest up six flights of stairs for me. I raced home to make spaghetti sauce while I still had enough light to see, then ate on the balcony as the sun set.

I normally hate cellphones and avoid them whenever possible. Now, it’s my lifeline, although in the middle of a crucial business meeting last night, the call kept getting dropped. I have a cell tower barely 15 feet above my head, right on the roof!

A cold shower last night felt good since the water was less frigidly cold than unheated and the night air fresh and soothing, not wintry and biting.

The sweetie comes home tonight from the city now that the trains are running again. I’ve already thrown out some of the food he bought, scared to eat it.

Con: Would like to do laundry as we are all quite sweaty.

Pro: Have revived my morning routine of listening to an hour of BBC World News on the radio.

Pro: Immediate potential for weight loss thanks to loss of ice cubes for our nightly cocktails.

Pro: Renewed sense of gratitude that, even with a severely damaged left hip, I have the strength and flexibility to climb six flights of stairs more than once a day.

Pro: Having to get out to the library to get any work done using the Internet means dressing, putting on some make-up and perfume, all technically unnecessary working alone at home.

Con: A large poster at the library door (Wanted! Kidding) advertising my speech here about “Malled” next week means I can’t afford to show up looking like hell.

Pro: Having a sweetie who prepared us well for Hurricane Irene and suggested I take a power strip to the library today.

Con: Fighting for access to outlets with territorial 14-year-olds desperate to keep texting.

This morning the sweetie took a car service (company paid) the 25 miles in to his office because there are no commuter trains running. He may be back Wednesday, leaving me on my own — with a lousy hip, six flights of stairs, cold water and, luckily, lots of flashlights and batteries, candles, food and a cooler I plan to fill today with ice.

Thank heaven he is such a planner! He’ll stay the next few nights in Manhattan with friends.

We had considered ourselves — hah! — unscathed, even seeing blue sky around 4:00 p.m. Sunday. “The back end of a hurricane is always rougher,” Jose warned. And so it was, with the wind whipping much harder then on.

I’m writing this at a local library, where every chair is filled as power-less refugees sit with their laptops.

We sat on the sofa last night and talked. No TV! We went to bed and read by the combination of flashlights and candles but crashed by 9:30.

I am loving the silence: no refrigerator hum, no other people’s TVs or music, no roar of the bathroom fan. I love candlelight, although it makes me long for a few brighter kerosene lanterns instead.

My plan to shower at the Y won’t work — every local YMCA chose this week to close for renovations. I may beg a local friend to let me have a hot shower in a few days. Good thing it isn’t winter!

Trying not to open the fridge too often to keep it cold, and planning to cook all the meat in it this evening, thanks to a gas stove that still works.

It’s semi-pioneer time. To keep the cellphone charged, I plug it into the car while driving. To speak to someone, I have to use the cellphone, but have no urgent engagements until a 30-minute radio interview with a woman in Montreal this Wednesday.

We’ve been largely spared: no flooded basement or roof or car smashed in by plummeting branches. No kids or pets to worry about.

If you were in Hurricane Irene’s path, how are you doing today?

Ever since 9/11, New Yorkers near the city have been urged to keep a “go bag” at the ready, packed in case we need to flee within minutes.

The roads and airports would be clogged and I have no doubt, if things were really crazy and out of control — a nuclear accident, say, from the plant a few miles upriver, the one we can see from our bedroom — that violence and mayhem would ensue, so the best thing to pack might be a gun and ammo. But, I digress.

In anticipation of Hurricane Irene and a possible need to run, fast, to shelter — hello, blue sky! — we packed a shared duffel bag. We have no kids, pets or elderly we needed to worry about, so it was just our stuff.

It’s an interesting moment to think hard about you must absolutely take with you and what you must — the other 99% of your belongings — leave behind.

What would you take?

Is it a good thing or a bad thing that we live atop one of the highest hills in our area? That our top-floor balcony faces northwest and the hurricane heading toward us — with projected local winds on Sunday of 90 miles per hour — is coming from the southeast?

As some of you know, Hurricane Irene, heading north as I write this up the Atlantic coast of the U.S., is larger than Europe.

I wish I could make a jaunty joke about baguettes or gondolas but the very idea of something so powerful headed our way is a little scary.

removed everything from our balcony

garaged (and gassed) our car

stocked up on bottled water, tinned food, ice, batteries and our battery-powered radio

We’re debating taping our windows, but not sure what good, if anything, that would do. As a news photographer, Jose has covered five hurricanes, so he knows what to expect and how bad the aftermath can be. I’ve only seen them on television.

New York has had an apocalyptic week — I was at home working, on the phone with Jose at 1:51 p.m. Eastern time Tuesday, when a 4.8 magnitude earthquake in Mineral, Virginia — very far from where we live — shook my chair, desk and all the objects atop the cabinet beside me. We live on the 6th. floor of an apartment building and as I felt the room move, had a severe case of cognitive dissonance: It can’t be an earthquake. We don’t have those in New York.

But it was. This is a week of never-before-this moments.

Tomorrow — in an unprecedented move — all New York area public transit will be shut down. As some of you know, millions of commuters come into Manhattan each week driving through tunnels from the outer boroughs and New Jersey. Now they are a potential death trap, and therefore closed.

My first earthquake and hurricane in one week?

Are you kidding me?

The afternoon began with more excitement than I’d planned after I stepped out onto my terrace to measure the snow — barefoot and in a T-shirt — and the door slammed shut and locked behind me. I live on the 6th. floor. Couldn’t get a window open to climb back in. Thank heaven my neighbor (who’s done this for me before) was home, let me climb across her balcony and got the super’s extra keys to my front door.

The snow is gorgeous, as long as you’re not shoveling it or driving in it. Smells: woodsmoke, a skunk. Sounds: a crow, the clank and rattle of the snowplows, the streets otherwise empty of traffic. Sights: a little girl making a snowman, teens sledding the hill at the nearby school, trees bent low under the snow’s weight. Now the wind is howling. Thank heaven home is warm and dry.

Here are two of my photos. 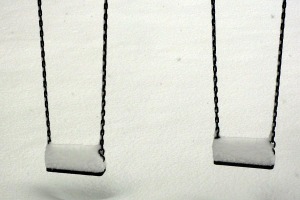